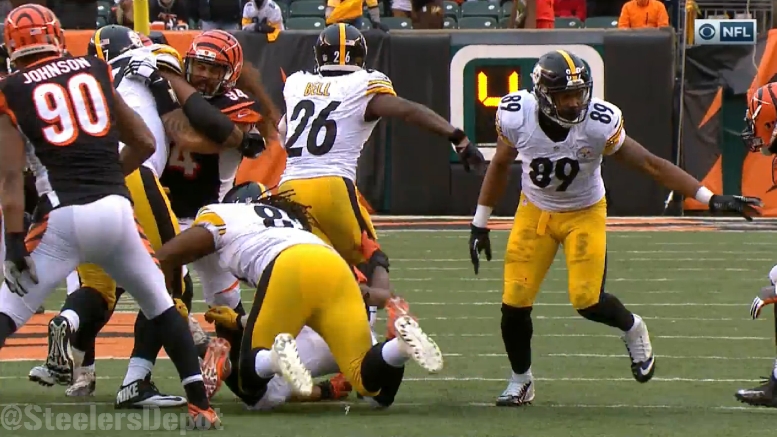 About a week ago, our very own Dave Bryan put together a very detailed and informative study on 25-year old running backs coming off a 300-touch season. This is of course important as it directly relates to the Pittsburgh Steelers’ very own star running back Le’Veon Bell. Bell, now 25 recorded 336 touches last season and as Dave noted in his study, the following season has not been favourable for 25-year old running backs following a 300-touch season.

According to history, the following season may not hold favorable odds for Bell but then again one season of play may be too small a sample size to hold against him. A lot can transpire in one season that can deteriorate one’s value such as an unlucky injury. Due to this, I decided to expand on the study and apply a three year follow up on the 25 running backs listed. A clear picture of consistency or regression may begin to show itself this way as we look at running backs entering their age 25-27 seasons.

“Created by PFR founder Doug Drinen, the Approximate Value (AV) method is an attempt to put a single number on the seasonal value of a player at any position from any year (since 1950)”

Why value and not statistical numbers? That’s simple, it is a term that is found at the roots of any contract negotiations. Both the Steelers and Bell have their own interpretation of the running back’s value going forward. Now here’s where the study comes in, applying the three-year study on the 25 running backs in the same position as Bell may show if a running back’s mileage at an early age affected their value moving through their mid 20s. 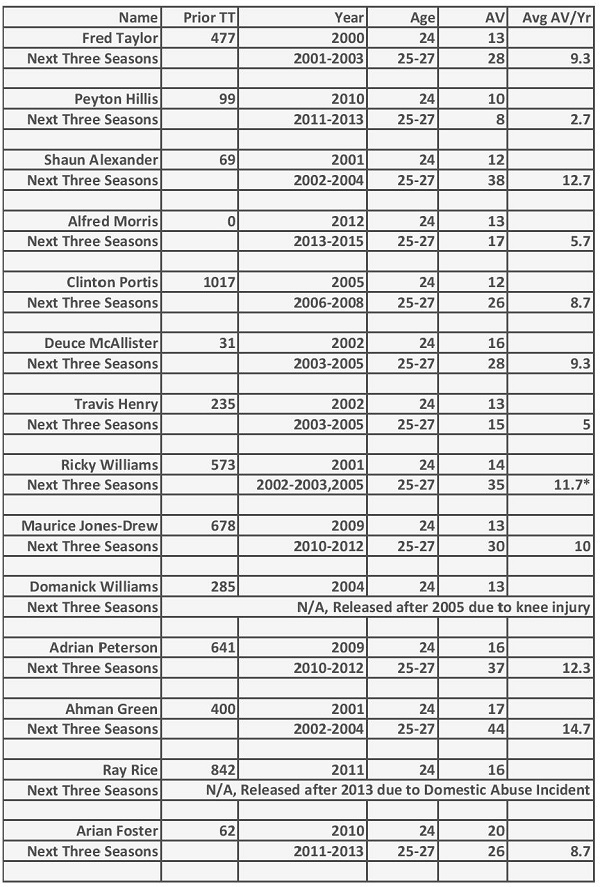 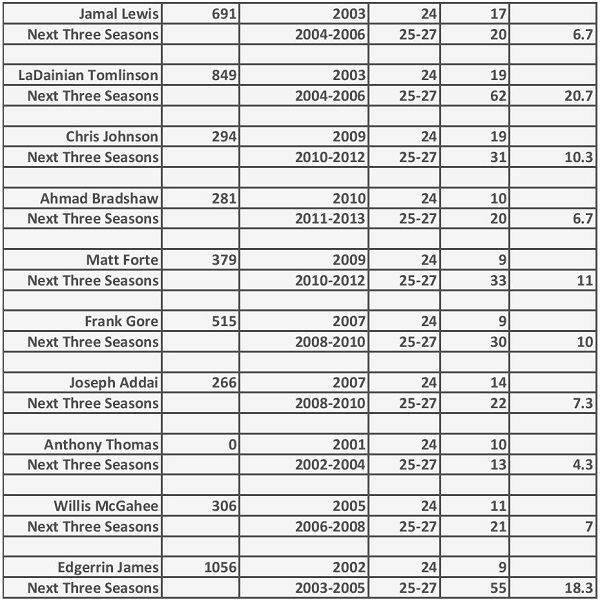 For starters, the average AV/Year of the running backs selected (omitting Ray Rice and Domanick Williams due to neither playing until their age 27 season) is 9.27 AV per year. Twelve running backs of the 25 running backs selected were able to average over 9 AV a year in their age 25-27 seasons. Surely, a fifty-fifty risk does not sound completely terrifying when it comes to all the other risks and probabilities surrounding the game of football but now let’s apply Bell to our study.

Coming into his 2016 campaign in which he touched the football a whopping 336 times, Bell had 799 prior touches. Out of the 12 running backs I discussed above who had averaged over 9 AV per year, only LaDainian Tomlinson and Edgerrin James had eclipsed Bell’s total of 799 prior touches. Once again, the bridge between future production and fresher legs begins to show itself as the average amount of prior touches these 12 running backs had accumulated was 497 total touches – roughly 300 less touches than Bell.

But wait, let’s not close the books on this one just yet. If there is one silver lining to the data it is that Tomlinson (20.7 AV/Year) and James (18.3 AV/Year) led the pack in AV/Year despite their Bell-like workload. While the injury card is an easy counter argument to Bell replicating the value as Tomlinson and James, a trip down memory road shows it can also be negated. Like Bell, James also suffered a catastrophic knee injury early in his career, tearing his ACL during the 2001 season. The injury played little part in James’ future value as the former Colts and Cardinals running back missed just six games in the six seasons that followed.

Bell is banking on himself to join Tomlinson and James as the only heavy workload running backs to produce at an elite level. The good news – if Bell succeeds, it will likely be as a member of the Steelers. Bell will play this upcoming season under the franchise tag, and should he produce as expected, the organization will likely franchise tag him once again with the possibility of another round of contract negotiations, giving the team more than enough time to judge his value moving forward.