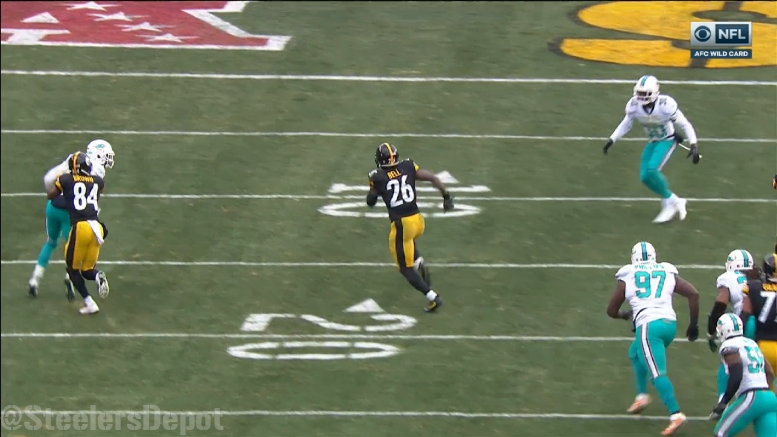 With the deadline for the Pittsburgh Steelers to sign running back Le’Veon Bell to a new long-term contract inching ever so closer, the talk about his age and mileage appears to be ramping up somewhat and that’s certainly understandable. Not only is Bell now 25 years of age, he’s already registered 1135 total regular season touches during his career despite only playing 47 games. More significantly, perhaps, is the fact that he’s coming off another regular season of touching the football more than 300 times and 336 to be exact.

I was curious to see how other NFL running backs have fared at the age of 25 coming off years where they touched the football at least 300 times during the regular season since 2000. According to my fact find finding mission on Pro Football Reference, there have been 25 running backs that match that criteria and below is a table that shows not only their stats at the age of 24, but how each fared the following season at 25 years of age along with the differences in their two years.

Before we get into digesting the results, however, I should point out that the age listed of each of the running backs below is based on how old each was come December 31 of that season. While obviously not listed in the table below, it’s worth pointing out that Bell turned 25 in February and thus he’ll be a lot closer to 26 by the time the 2017 regular season comes to an end.

Now, also before we get into the results, I need to make sure all of you can identify each of the column headings. Most should be pretty straight forward outside of “Prior TT” and that stands for prior total touches entering that particular season. This is an important number, in my opinion, and I’ll explain why later in the post.

The first thing that jumps out in the differences of each player’s yearly stats below is the fact that 14 of these running backs missed at least two regular season games the year following them registering 300 or more touches.

The next difference that pops out is the fact only four of the 24 running backs, Edgerrin James, Deuce McAllister, Matt Forte and Ricky Williams, saw an increase in total rushing yards the season immediately following their 300-plus touch season at the age of 24. Additionally, only seven running backs in total had an increase in average yards per carry. And, only six running backs on this list saw their receiving yards increase the season following them touching the football 300 times or more.

As far as total touches (TT) go, only four running backs had that number increase the following season and Shaun Alexander just made the list with an increase of one touch.

As you can see by the blue numbers, Edgerrin James, Deuce McAllister, Matt Forte and Ricky Williams are the only four players on this list of 24 running backs who really had several statistical increases across the board the season following them touching the football at least 300 times at the age of 24. Let me point out, however, that McAllister was a fairly fresh running back when he was 25 as he entered his 2003 season having only touched the football 403 times. Ricky Williams, who for all practical purposes, was built a lot like McAllister, entered his 2002 season having touched the football 946 times. Forte was right between those two with 694 total touches. James, on the other hand, had 1394.

Bell, as I pointed out earlier in the post, has already registered 1135 total regular season touches entering the 2017 season and when you look at other running backs on this list who had at least 900 or more touches at the age of 25, there’s only eight of them with Clinton Portis leading the way with 1399.  Of those eight, only Ricky Williams and James saw an increase in total yards from scrimmage from the previous season. It’s worth noting, however that Maurice Jones-Drew and Adrian Peterson came close to accomplishing that feat and probably would have had each played in all 16 games.

Let me close this post by saying that stats are stats and history is history. Additionally, offensive line and quarterback play are certainly not measured in any of this study. With that all said, the fact that Bell registered his 1884 total yards from scrimmage in just 12 games last season should allow him to come close to either equaling or exceeding that number in 2017 if he’s able to stay fully healthy as he’s sure to touch the football at least 300 times if all goes well. However, it probably won’t be surprising to see his yards per carry and total touch average both decrease some just the same. 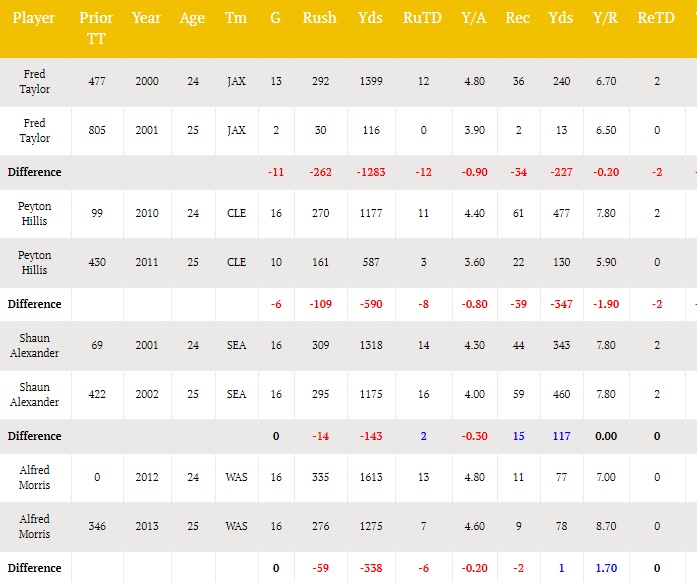 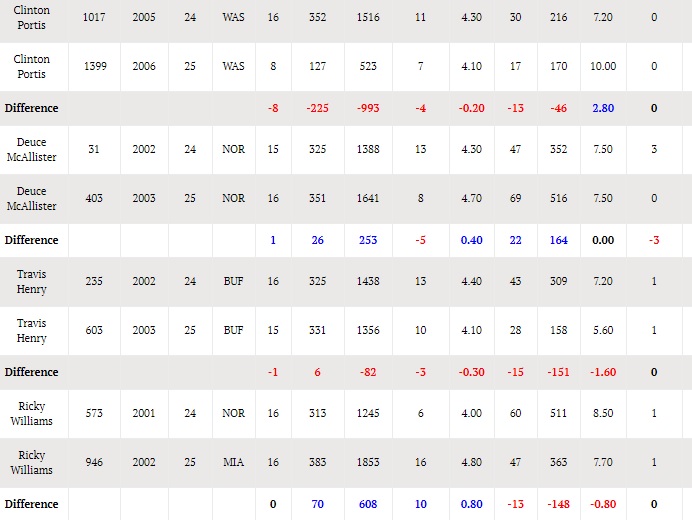 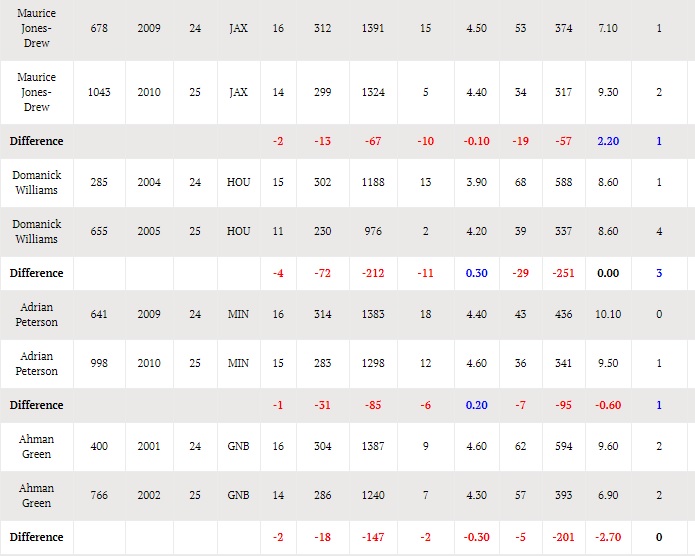 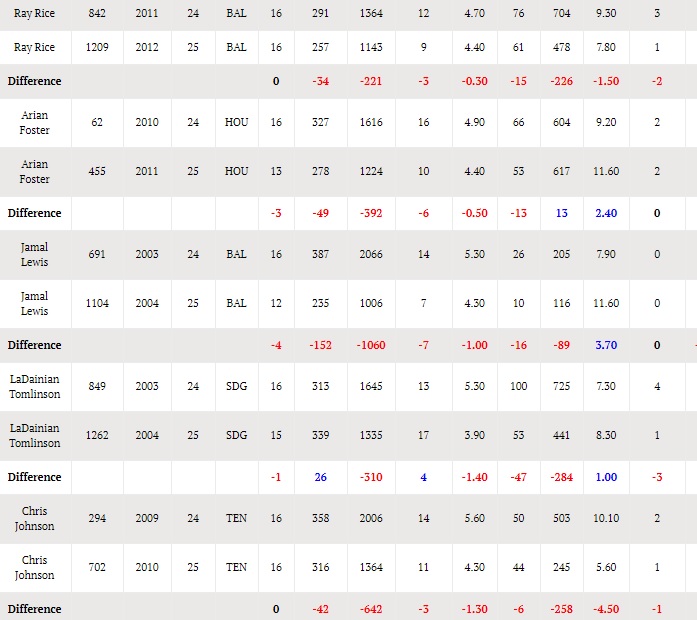 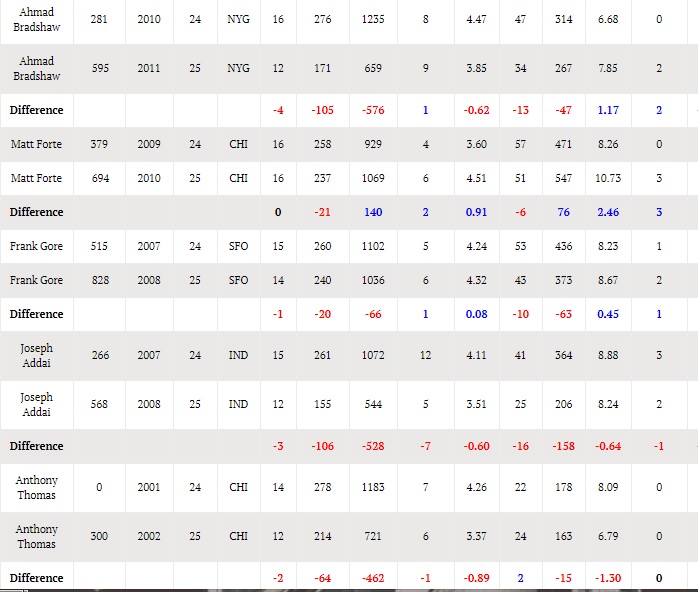