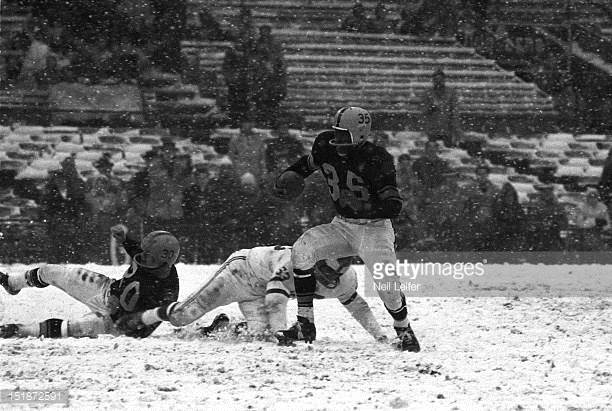 Next up, running back.

To preface, I promise this entire series won’t be exclusive to the pre-Noll era. It just so happens the best running back since Noll are commonplace to even the casual fan (Franco, Bettis, Parker, Bell). There are several different options we could go; Rocky Bleier, Frenchy Fuqua, even Frank Pollard. But John Henry Johnson outpaces them all.

JHJ’s most remembered days come from his time with the San Francisco 49ers, spending his first three seasons there. He was part of the Million Dollar backfield consisting of Y.A. Tittle, Hugh McElhenny and Joe Perry along with himself. In 1954, his first year in the NFL, he finished second on the team in rushing.

After spending three seasons more in Detroit, he was sent back to the team who originally drafted him: the Steelers. Honestly, I had no idea he was supposed to be a Steeler. They took him in the 1953 draft but lost out when Johnson opted against playing for Pittsburgh and spent a year with the CFL’s Calgary Stampeders.

In his first year with the Steelers, he came in second on the team in rushing but was way more efficient than Tom Tracy (5.3 average compared to Tracy’s 3.5). Seeing that, JHJ became the “guy” in ’61, leading the team with 787 yards. But 1962 was his best year, one of the most successful ones in franchise history, finishing the year 9-5 and second in the division. He rushed for 1141 yards, making him the first 1000 yard rusher in team history. Throw in seven touchdowns and another 32 catches (third on the team), and you have a bellcow back and elite talent. The original Bell.

In 1962, he posted four 100 yard rushing games, including three straight early on. Two years later, he set a franchise record of 200 yards against the Cleveland Browns, chipping in three scores in a 23-7 beatdown. Franco Harris never had a 200 yard game. Neither did Barry Foster. Or Jerome Bettis.

Johnson is still the oldest player in NFL history to rush for at least 200 yards, doing so at 34 years old in 1964. He tops second place by nearly three full years.

1964 produced another 1000 yard season, by the way, his final one with the Steelers. A short stint with Houston didn’t go well and he hung his cleats up at 37 years old as one of the most productive backs earlier. When he retired, only Jim Brown, Jim Taylor, and ex-teammate Perry had more rushing yards with him in league history.

Much of this article has been about his rushing but Johnson was an equally adept blocker. He helped pave the way for Perry in San Fran and in 1987, players made sure to remind the world of it.

“He was probably as good a blocking fullback as I’ve ever seen,” Steelers’ back Dick Hoak told Ed Bouchette in this 1987 article.

Chuck Noll even had a great story of getting toasted by Johnson.

“I remember him hitting me upside the head with a forearm. I was rushing the punter and he was the guy protecting the punter. I came in and he unloaded on me most of the guys you had back then.”

1987 saw John Henry Johnson inducted into the Hall of Fame. As the video from NFL Films will tell you, Johnson chose Art Rooney Sr. to present him. Rooney, who was sick, was happy to oblige. It was the last time Rooney would present for a Hall of Famer, passing away the following August.

Even when Bell passes him up this season, Johnson will still rank 5th in Steelers’ history in rushing yards, and he’s likely to stay in that spot for quite some time. Yet when you see the names which surround him, Harris, Bettis, Parker, Bell, Henry Johnson earns zero of that spotlight.

Today, we put that light squarely on him.