Next up, strong safety Sean Davis.

The tackling numbers from last year certainly don’t look pretty for Davis. 19 misses in total during the regular season, per our Josh Carney, though there’s a couple caveats to that. The now-obvious, the rookie pushing through a torn labrum he got taken care of during the offseason. And the less so, like missing five of those in the regular season, and evening out the rest of the way.

So there’s reason for optimism and to expect him to improve. I mean, he better, or else there are some concerns about his long-term future. But you can’t just assume he’ll get better because he’s healthy or that was the sole cause of his problems. It wasn’t. Technique wise, he needs to clean up his game, either because his technique is truly bad or he adjusted his tackling habits to compensate for his injury. Still has to learn/re-learn things.

Coming to balance is one of the keys to tackling. Breaking down the correct way. Eyes over chest. Chest over knee. Knees over toes. Seeing what you hit (eyes up). Not narrowing your base, crossing your feet, or lunging. And practicing a near shoulder/near leg relationship. The Seattle Seahawks and Peter Carroll teach this as well as anyone, explained many times, including by Peter King in 2014.

“The Seahawks refer to themselves as a “shoulder leverage tackling team.” Basically, they track the near hip of the ball carrier, and then lead with the near shoulder in the thigh of the ball carrier. They feel this helps take the head out of the equation. The basic tackle is the Hawk Tackle. The teaching points are: eyes through the thighs, wrap and squeeze, and then “drive for 5”—push the ball carrier back five yards when necessary.”

In the NFL, it looks like this, from the Seahawks. 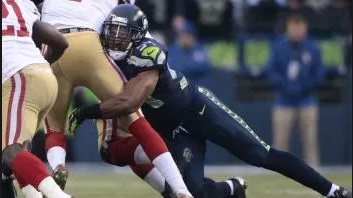 The facemask is behind the play, also reducing neck/spinal injuries. And while I think Davis works hard to come to balance and shoot, he does struggle to adhere to the near shoulder/near leg principles. Often, he’s driving with his far leg and not wrapping up through the tackle.

Week One against Washington, that very ugly game. Would like to see Davis shoot through Jordan Reed instead of lunging. Doesn’t have power, doesn’t wrap at the waist, and his arm tackle misses. Reed nearly reaches the sticks on third down. 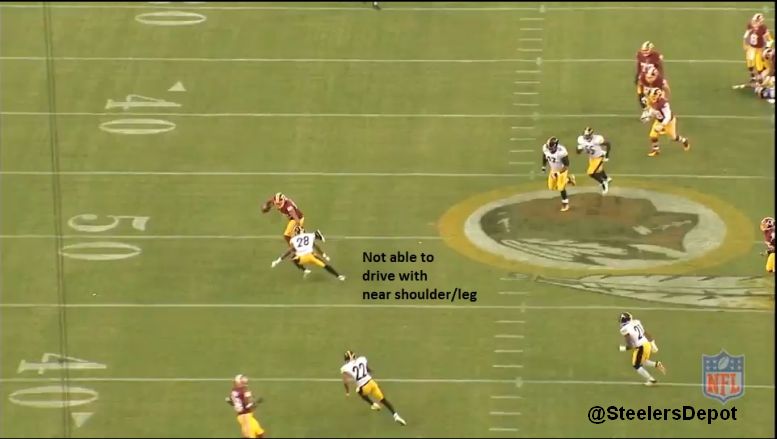 Or here versus the Eagles.

Davis is unable to come to balance here, is too tall, and has no power as he tries to drive through the runner. 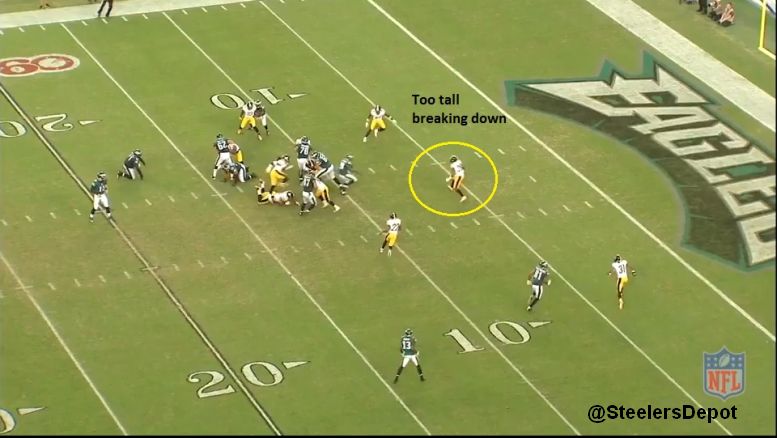 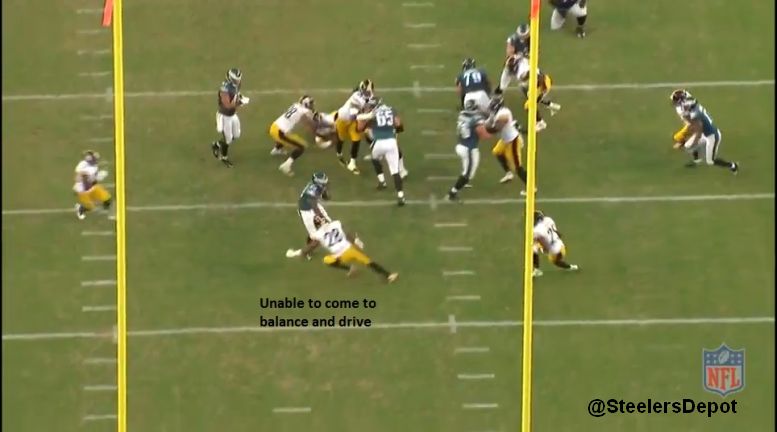 This play ultimately didn’t cost the Steelers either but it’s a really good example, though a little hard to see because of the snow. The touchdown to Charles Clay. Davis isn’t near shoulder/near leg, pushing off with his far leg, and doesn’t have the power to grab onto Clay’s waist. Shaken off, crashing into William Gay, and Clay scores. 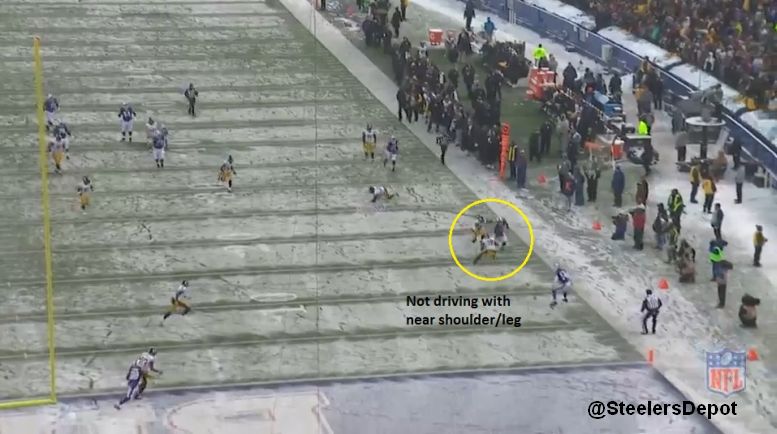 Davis’ ability in coverage looked better than I remembered and he did well reading and reacting to routes in zone coverage. I think he’ll have a good second season but that tied to having a consistent one. That means his tackling must be steadier. It’ll define him, both in the short and long-term.