Le’Veon Bell has certainly taken a lot of heat from the Pittsburgh Steelers’ fan base after the contract he declined was partially made public. As is often the case, Bell has been painted as greedy and selfish for not coming to terms with the team.

Bell, still training in Florida, issued a response to those comments on social media a short time ago. This photo was posted to his Instagram and Snapchat feeds. 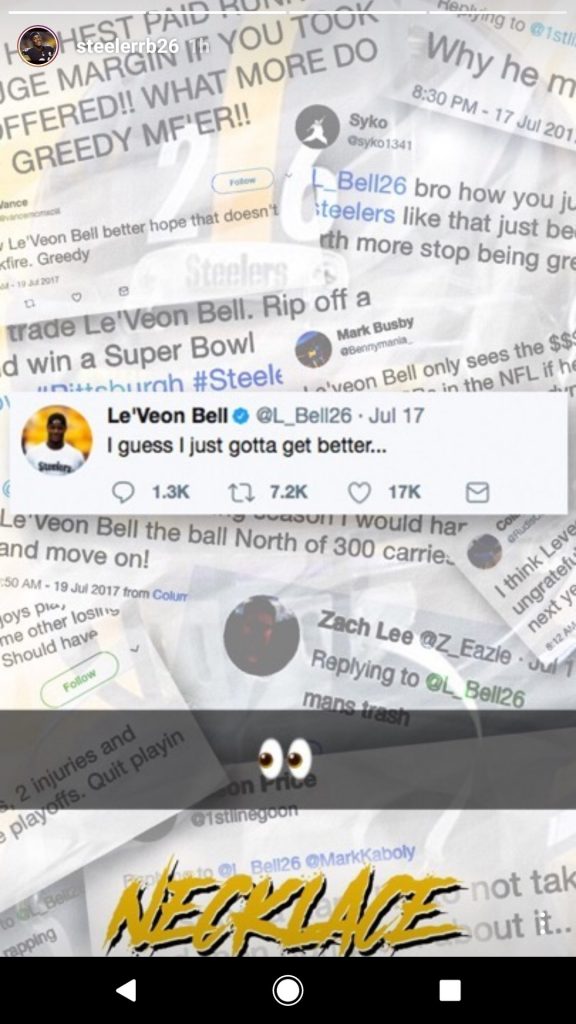 If you can’t see, that’s Bell’s tweet/comment of “I just gotta get better” in the foreground with negative Twitter comments from fans in the background. It also has the “eyes” emoji as its caption.

Bell’s clearly using feeling undervalued by the Steelers and now the blowback from fans as motivation heading into 2017.

Things have been a bit of a mess since the two sides were unable to strike a deal Monday afternoon. While Bell will be a Steeler this season, and will be there Week One against Cleveland, it’s unclear when he will show up for training camp. Most expect Bell to skip a chunk of it, only returning after Latrobe practices break and the preseason comes to a close.

There’s also a question of the state of Bell’s future with the team. Uncertain as ever, it feels like a long-term deal next offseason will be difficult to pull off. Bell has stated he wants to completely reset the running back market, a price tag the Steelers are likely unwilling to entertain. That leaves letting Bell walk, or placing the tag on him again, the only remaining options.

For now, Bell will be fueled by the “haters,” and look to have his best season in the NFL. With the way the Steelers’ offense looks, that looks like a strong possibility.