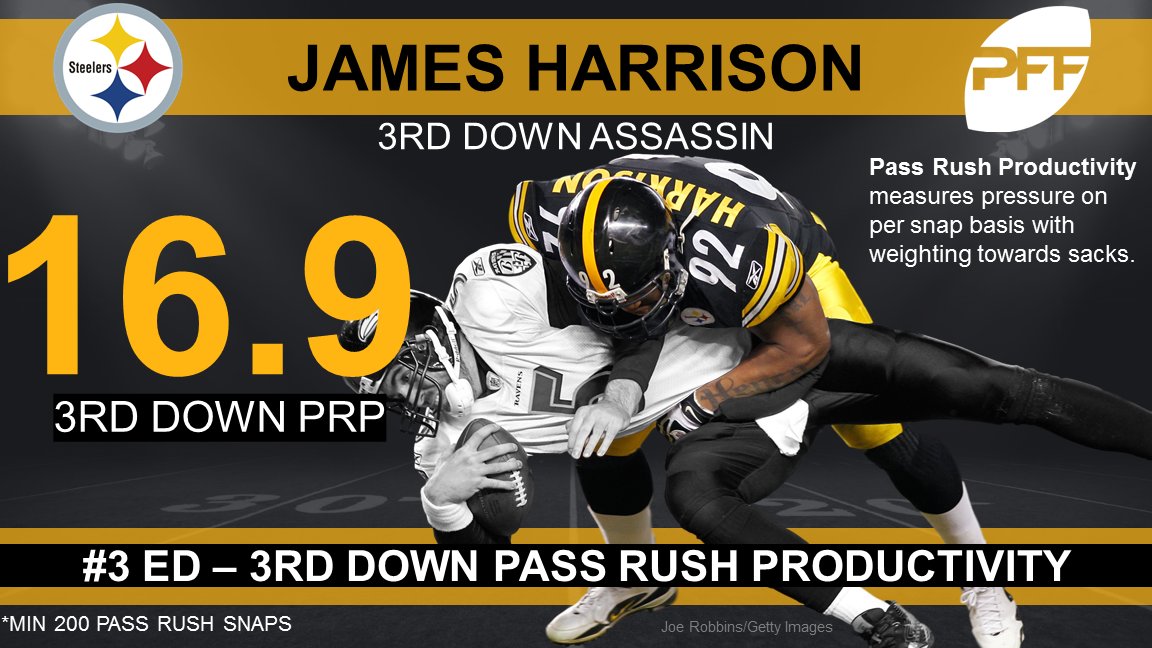 James Harrison reports today for his 16th NFL training camp, and his 14th with the Pittsburgh Steelers over the span of three separate stints. Undrafted in 2002 and signed by the team, he spent 2003 in the Ravens organization and in NFL Europe before making the Steelers’ roster in 2004.

He was released after refusing a pay cut and spent 2013 with the Bengals, released a year later halfway through a two-year contract. Then he retired, and returned to play some of the best football that he has in years, seeing an improbable upward trajectory in his efficiency so late into his career.

Now 39 years old, Harrison is officially entering his 15th season in the NFL, and doing so as the presumed starting right outside linebacker for the first time since 2012, even though it is pretty much a given that the team is going to give him some snaps off, likely with T.J. Watt if he continues the development path he is on.

But there is a reason that he is in the position that he is in now, and that is quite simply because he has continued to play at a high level. This is something that we have pointed out more than once over the course of the offseason—we have also pointed out a number of his insane workouts, including pushing a 1800-pound sled—but one more before training camp practices start feels appropriate.

Let’s start off with the most basic. According to Pro Football Focus, Harrison was the fifth-most efficient 3-4 outside linebacker in rushing the passer during the 2016 season. Only Khalil Mack, Von Miller, rookie Joey Bosa, and Ryan Kerrigan posted a higher pass-rush productivity.

The Chargers' Joey Bosa found himself ranked among some pretty elite company during his rookie season. pic.twitter.com/kNm58vkE45

When you narrow the focus down to the right side only, he looks even better, as only Mack and the Bears’ Leonard Floyd had a higher pass-rush productivity while rushing from the right side than did Harrison. It is worth noting that both Mack’s and Harrison’s right-side numbers were lower than their overall numbers, suggesting that it’s more difficult to get pressure from the right side.

Even pushing 40, @jharrison9292 is still one of the most feared pass rushers in the NFL pic.twitter.com/wxP4Hm3Q5S

Yet another graphic from Pro Football Focus shows that Harrison was also the best pass-rusher in the AFC North last season. His 12.2 pass-rush productivity rating was significantly better than the Bengals’ Carlos Dunlap and the Ravens’ Elvis Dumervil.

38 years old and still the most effective pass rusher in the AFC North pic.twitter.com/cnzcyeLnkv

Finally, saving the best for last…well, that is what Harrison did. His pass-rush productivity on third down was exceptional, posting a score of 16.9, which according to the site’s data, was the third-best rating among presumably all positions, provided that they recorded at least 200 pass rushes.

39 years old. Still a monster on third down. pic.twitter.com/1V3FpoU35l

That is a rather impressive feat, and it should be no surprise then that four of Harrison’s five sacks during the regular season—and another in the postseason—all came on third down. Nobody else on the Steelers had more than two sacks on third down, by the way. Third-down assassin, indeed.