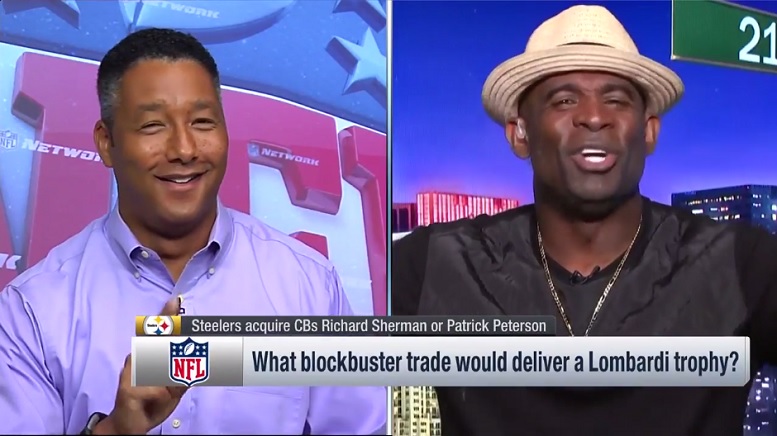 As of midnight, Pacific Coast Time, you can now legally buy marijuana for recreational use in the state of Nevada. Judging by a Friday segment on ‘Total Access’, NFL Network talents Steve Wyche and Deion Sanders are already legally or illegally partaking in the herb.

For some reason, Wyche and Sanders discussed potential blockbuster trades that would change the course of the Super Bowl race in the 2017 and the former had a few outlandish ones for the Pittsburgh Steelers.

In a non-salary cap world, this would be a brilliant suggestion by Sanders. I guess that aspect was ignored, however, and while starved for content and something to talk about, it really can’t be. In case you weren’t already aware of it, Richard Sherman is guaranteed to earn $11.431 million in 2017 from the Seattle Seahawks and another $11 million in 2018, the final year of his current contract. As for Patrick Peterson, who is currently under contract through the 2020 season, he’s scheduled to earn $9.75 million in 2017. Additionally, the Arizona Cardinals have no reason to trade him.

Sure, the Steelers could make cap room by restructuring a few players contracts such as Ben Roethlisberger’s and Maurkice Pouncey’s, but that would be very foolish to do.

Not to be outdone by Sanders, Wyche offered up his own cockamamie trade idea that included the Steelers.

“Von Miller to the Pittsburgh Steelers,” Wyche suggested. “You talk about a guy who has wrecked their biggest nemesis, the New England Patriots, this guy played against them eight times, Prime. He has seven and a half sacks, he’s got two forced fumbles, he’s got a pick, he’s just a disruptor, he’s got more than 18 quarterback hits. You add him to that defense and let’s say we get Sherman or Patrick Peterson on the backend, let’s do a duel blockbuster here, Prime.”

Yeah, Von Miller is set to earn $16.5 million from the Denver Broncos in 2017, so that deal isn’t happening either.

Look, I understand how hard it is to come up with content ideas during these six weeks of the offseason, but one would think the NFL Network has people they pay good money to come up with something better than this. Perhaps those employees live in Nevada.