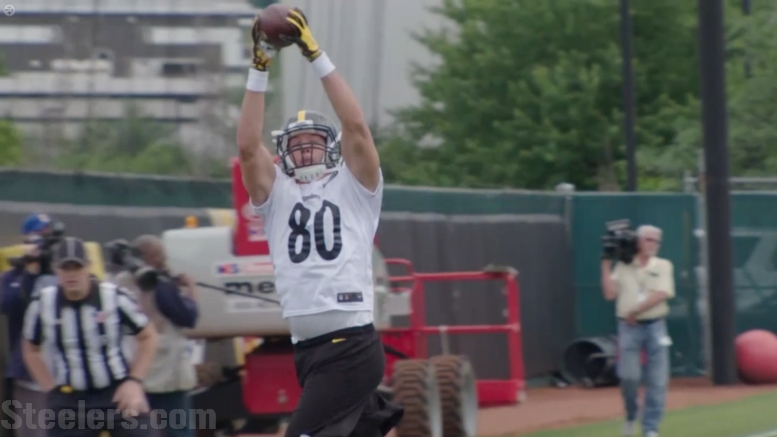 He might not be the most exciting name in training camp, but Pittsburgh Steelers rookie undrafted free agent tight end Scott Orndoff out of Pitt should be an interesting prospect to watch during training camp, as he at the very least should be fighting for a spot on the practice squad, with a shot at making the 53-man roster as well.

The team’s tight end group as a whole remains in somewhat of a transitional phase in the wake of Heath Miller’s retirement at the end of the 2015 season, and the end of Matt Spaeth’s career the following spring after he was released with a failed physical.

That is an awful lot of snaps lost over the course of the previous decade that the Steelers suddenly found themselves needing to replace, and they initially attempted to do so by signing Ladarius Green, more of a receiving tight end—actually much more—to be their starter.

That didn’t exactly work out, given that they released him with a failed physical designation one year into a four-year, $20 million contract, of which he got $6 million, if I recall the numbers of his deal correctly off the top of my head.

Yet despite that, the Steelers did not draft a tight end, nor sign one in unrestricted free agency. It’s possible that they didn’t quite know what would happen with Green at the time, but there was no urgency in a contingent option, and so they move ahead with Jesse James, Xavier Grimble, and David Johnson.

While a seemingly capable scrappy group of workmanlike overachievers, it’s certainly not murderer’s row, without room for somebody to emerge from the wings. Orndoff would like to be that emerging player during training camp, already coming into the league with an understanding of what it will take as a blocker.

But I also saw an interesting graphic recently from Pro Football Focus that highlighted the Pittsburgh tight end as a pass catcher. Citing a statistic meant to highlight Giants first-round tight end Evan Engram, we learn that Orndoff was actually a pretty productive receiver.

No TE in college football was as productive on a per snap basis in 2016. That’s the kind of #RookieImpact the Giants will expect to see. pic.twitter.com/iScNR3GJWQ

He did post career numbers last year, catching 35 passes for 579 yards and five touchdowns during his senior season. That is 12 more receptions than he had in his three previous seasons, although he did manage five touchdowns on just 13 receptions during the 2015 season.

Like James, Orndoff comes into the league as a tight end who was underutilized as a receiver but who has more ability than one might think on the surface. It will be interesting to see how he performs over the next couple of months as he attempts to crack the 53-man roster.