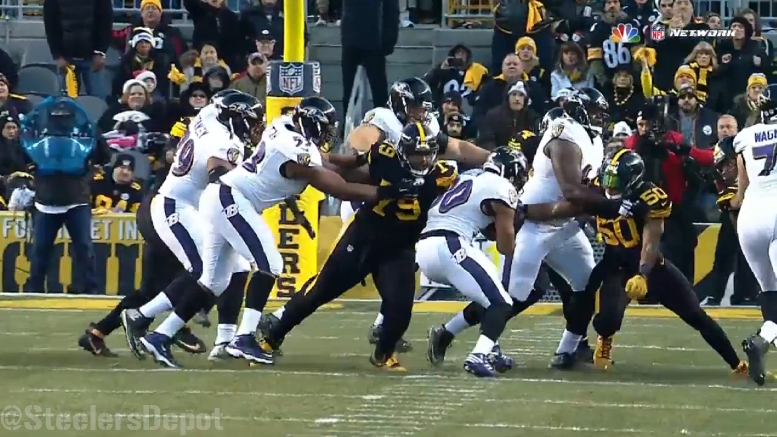 Baltimore Ravens guard Marshal Yanda has not been practicing with the team thus far this offseason as he continues to recover from offseason surgery on his left shoulder. As a matter of fact, he likely will get very little to no work at all over the course of the summer as he heals.

But he did at least tell reporters yesterday that he has every intention of suiting up for the Ravens on the first game of the regular season. “I can just tell you Week 1, I’m going to be out there, for sure”, he said, although the timeline is perhaps not so set in stone just yet.

He did say when speaking about his injured shoulder that “it feels really good”, and he acknowledged that he has not experienced any sort of setbacks over the course of his recovery process thus far, describing it as “smooth”. But we have seen just last season players around the division having surgery and being unable to make it back in a timely fashion.

The ability for Baltimore to have Yanda in the lineup is critical following an offseason in which they lost or parted with two starting offensive linemen in right tackle Rick Wagner and center Jeremy Zuttah. They have not yet found appropriate replacements for either yet, but it is worth noting the words of their owner.

After the Ravens were recently able to secure the services of wide receiver Jeremy Maclin—and it was reported that they could still be in the market to add another wide receiver, recently-released free agent Eric Decker—Owner Steve Bisciotti in a conversation with ticket-holders said that his priority now would be to find help among the blockers.

“If I have one bullet left in that gun”, he said, “I better save it for an offensive lineman”. And he had better, because he’ll be lucky to get even one bullet off. Prior to signing Maclin, the Ravens had under $9 million in cap space and have already cleared millions off the books via tight-end maneuvering. Maclin’s year-one cash flow will reportedly be around $6 million, but I would imagine that the cap hit will be at least $4.5-5 million.

Should the Ravens somehow manage to be without Yanda at the start of the season, and should they fail to acquire any other offensive line talent, the only starters from last season remaining will be a pair of second-year players in first-rounder Ronnie Stanley at left tackle and mid-rounder Alex Lewis, whose position is yet to be determined.

Baltimore did draft a couple of linemen in the mid to late rounds, and they have a couple of yeoman reserves, at least one or two of which they might have to be asked to start. Yanda will be able to mask some of the deficiencies of others—but he will have to be healthy to do that.