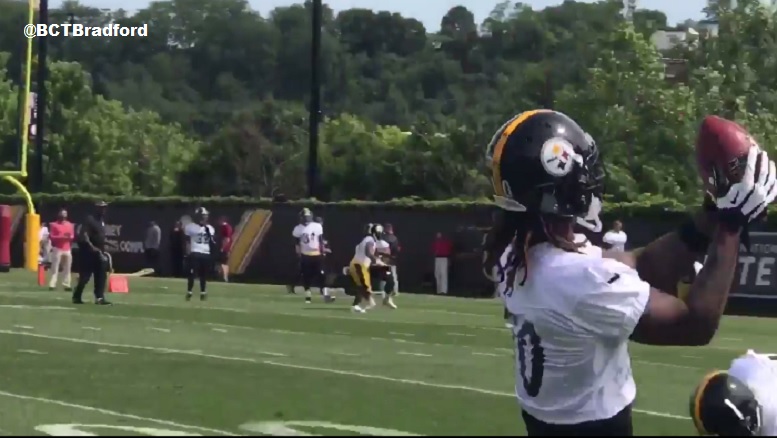 As we all had hoped would happen, Pittsburgh Steelers wide receiver Martavis Bryant was present and accounted for during the team’s first 2017 OTA practice that took place on Tuesday.

Bryant, who was conditionally reinstated by NFL commissioner Roger Goodell just ahead of the 2017 NFL Draft after sitting out the entire 2016 season following him being suspended for multiple violations of the league’s substance abuse policy, talked to the media after Tuesday’s initial practice concluded.

According to Ed Bouchette of the Pittsburgh Post-Gazette, Bryant indicated Tuesday during his talk with the media that he now gets drug tested three times a week as part of the conditions of his suspension eventually being fully lifted. Additionally, the wide receiver has to meet with a counselor twice a week.

Bryant, who admitted that he has gained some weight during his year away from the Steelers, reportedly said Tuesday that he ran with the first-team offense during his first practice back. He also said that during his suspension that he didn’t watch any football because he wanted to focus on his sobriety.

As for Bryant’s perceived condescending remarks to fellow Steelers wide receiver Sammie Coates on social media following the selection of wide receiver JuJu Smith-Schuster in the second round of the draft, he said those comments were made jokingly.

As you can see in the attached videos below, Bryant looks healthy and ready to pick up where he left off at in 2015. The former fourth-round draft pick out of Clemson caught 50 passes for 765 yards and six touchdowns in the 11 games he played in during the 2015 season that started with him missing the first five games as a result of a suspension and a minor injury.

Bryant’s future success in the NFL and with the Steelers is now in his own hands and he appears to be well-aware of the fact that one more misstep on his part will likely result in him being out of the game for good. He has the potential to be the league’s top deep threat and one can only hope he’s able to walk the straight and narrow moving forward.

As part of the conditions of his suspension being lifted, Steelers Martavis Bryant gets drug tested 3X week, meets with counselor 2 x week

Martavis Bryant acknowledged he ran with the first Steelers offense right off the bat. Said he watched no football during his suspension.

Bryant on why he did not watch Steelers last year: To focus on my sobriety also knowing I let myself down, my teammates down . . .

A sight that Steelers fans have been waiting to see: Martavis Bryant pic.twitter.com/IKiAHqWbp2

Martavis Bryant in action during day 1 of OTAs pic.twitter.com/7eyu07ZXNc

Martavis Bryant talks about what it has been like rejoining his teammates after missing an entire year. pic.twitter.com/jGyamcU51H