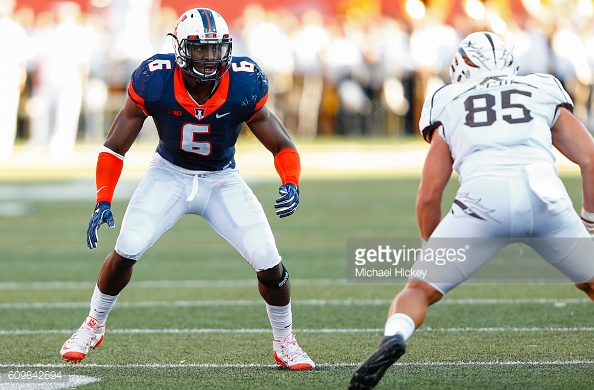 Phillips is a name we’ve told you about for awhile, reporting the team had interest in him during the Senior Bowl. Here is what we wrote at the time.

“Bottom line here: they seem to have interest in both Illinois EDGE rushers, Dawuane Smoot and Carroll Phillips. One scout said “the one guy I want to talk to is Carroll Phillips.” He’s a more conventional 3-4 edge guy than Smoot though Smoot is the more refined prospect and was more consistent this week.”

He was a one year wonder for Illinois, breaking out in 2016 for 19 TFL and nine sacks. He’s a great athlete, though tested a little underwhelming. Phillips ran a 4.64 with a 30 inch vertical ad 10’3″ broad at this year’s Combine. At the Senior Bowl, he showed a great first step and ability to bend the edge. But he was inconsistent and seemed to struggle with basic details of the defense, constantly being helped by teammates and reminded by coaches where to line up. He’s a project and given that he’s an older prospect, he’ll turn 25 in September, that presents a problem.

Cunningham would be an inside linebacker with Pittsburgh, playing the Buck. He had a strong 2016 season, racking up 125 tackles with 16.5 for a loss. He ran a 4.67, jumped 35 inches in the vert, and 10’4″ in the broad, impressive numbers across the board.

The Steelers now have 13 known non-local visitors leading up to the draft.