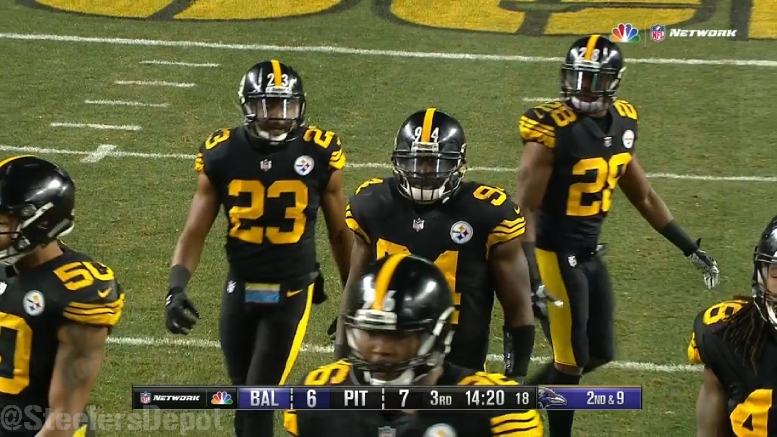 Mike Mitchell: Mitchell is entering his ninth season in the league and is closing in on 30. He is entering his fourth season with the Steelers on a five-year contract. He only had a so-so season last year, but that came with some mitigating factors, including a lot of mixing and matching around him. There seem to be an increasing number of amateur observers who believe he needs to be replaced sooner than later.

Sean Davis: The Steelers’ second-round draft pick, Davis opened the year in the slot and played the second half of the season as the starting strong safety. He had his trial by fire moments, but he also played very well in others. He is athletic and rangy, but can continue to work on his tackling, and finishing. He missed a couple of sacks that he should have had.

Robert Golden: Golden entered his fifth season last year as a starter, but didn’t have the campaign he was looking for. He got injured early on and eventually lost his starting job—and even his backup job, it seemed. Still, I don’t believe for a second that the coaching staff has lost faith in him and his ability to play. He had some high-profile misses, but he is a decent player.

Jordan Dangerfield: The funny thing is that Dangerfield and Golden are both 26, but the former just played in his first season. He spent years in training camps and practice squads, finally making a roster last year. He made a couple of starts for Golden and played well. A notable special-teams player, it will be interesting to see what 2017 holds for him.

Jacob Hagen: Hagen is a big safety with quality measurables, but doesn’t always have it upstairs. He showed that at the collegiate level, and that’s not generally something that improved with superior competition. He spent time bouncing on and off the practice squad last year.

Shamarko Thomas: A former fourth-round draft pick in 2013, Thomas didn’t develop into the starter the Steelers were hoping to get out of him, but he did at least develop into a quality special-teams player. Given the scarcity of bodies at the position, it wouldn’t be surprising if he gets re-signed after the draft to compete for a spot.

Notes and Draft Outlook: How is it that the Steelers are ostensibly going into the draft with just five safeties on their 90-man roster? And they only have nine roster spots open, meaning eight draft picks and one undrafted free agent, though the roster can always be modified.

Still, that is a small number of safeties and might lead one to suggest that they are seriously considering drafting a safety. Given the number of players at the position that they have brought in for pre-draft visits, that would have to be a reasonable hunch.

Still, while I don’t think it’s necessarily essential that they add to this position, this is an area that realistically could be addressed anywhere in the draft, from the first round to the seventh, especially if that safety can cover the slot.