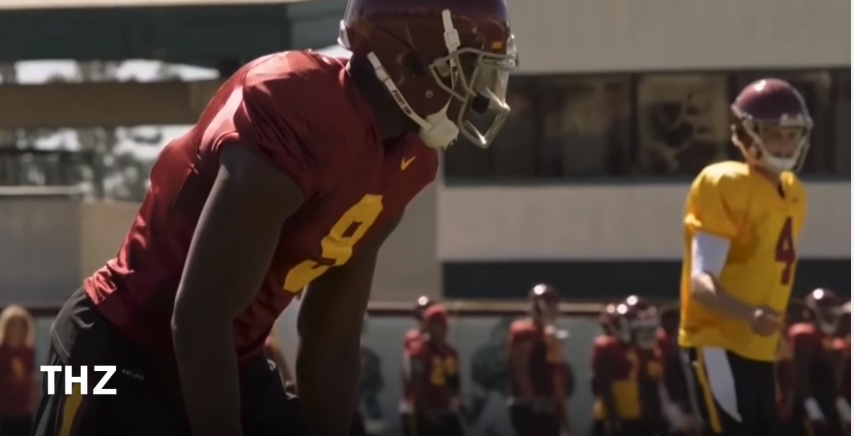 Because he plays like someone five years older. And maybe we’re seeing a theme here with the Pittsburgh Steelers first two picks, he and TJ Watt. Young guys who are much more refined than you’d expect. To be clear, Smith-Schuster has more experience than Watt, playing three years at USC and leaving school as a true junior. But he’s not allowed to have his first legal drink until November.

And he feels like he could play in the slot tomorrow.

That’s what stuck out to me the most after watching several of his games. To be honest, I didn’t really watch him prior to him being selected because he seemed so far off the radar. Even Smith-Schuster seemed surprised, noting the only time the Steelers spoke with him was the brief, frenzied 15 minute chit-chat at the NFL Combine.

Picking a receiver might seem confusing but we told (warned, depending on your perspective) this was happening early. As some level of insurance on the outside with Martavis Bryant and Sammie Coates’ unpredictability. But what if both pan out? Where does the rook fit?

Don’t forget about him in the slot.

I’ve floated the idea from time to time and taken some flack for it: upgrade over Eli Rogers. Don’t get me wrong, I like Rogers. I was one of the first guys to talk about him as a UDFA out of Louisville, saying he wasn’t your “normal” undrafted guy. He has talent, worked his butt off, and is worthy of a spot on the team.

But is he the ideal slot guy? He’s a limited YAC threat in an offense where virtually everyone else is. Antonio Brown? Duh. Le’Veon Bell? Same deal. Bryant, Coates, and Ladarius Green are all capable of stretching the field with their size/speed, neither of which Rogers really brings.

Smith-Schuster is an obvious upgrade in size and is the better athlete than Rogers. He may be tall, standing in at 6’1, but it’s his feel for finding open grass, his effort in scramble drills, and his toughness/willingness to go over the middle that makes him a strong slot candidate. Let’s take a look.

We’re thankful enough to score some All-22 college tape on him. Here, he begins to settle and show his numbers to the QB in zone coverage. But when the play breaks down and the quarterback begins to move to his left, he immediately begins to run with him, get in his cone of vision, and find grass to that side of the field. The QB finds him and he finishes with a diving catch, absorbing the blow from the DB closing in.

Or here, in 2015 when he was just 19 years old. 3rd and 7. Initially runs a curl at the sticks but as the play is extended, runs away from his defender and to the sideline. Vision on the quarterback, a feel for where the sideline is, and the ability to finish the play. This guy consistently moved the sticks in key, third down situations. In a sentence, that’s the role of a slot receiver.

His bigger size will make it tougher for linebackers to reroute him. Didn’t want to muddy things up with another GIF here so I’ll show you two photos. Penn State linebacker looks to bump him off his route on this drag and while JJSS gives some ground, he runs through contact without any change in balance or any loss of speed. 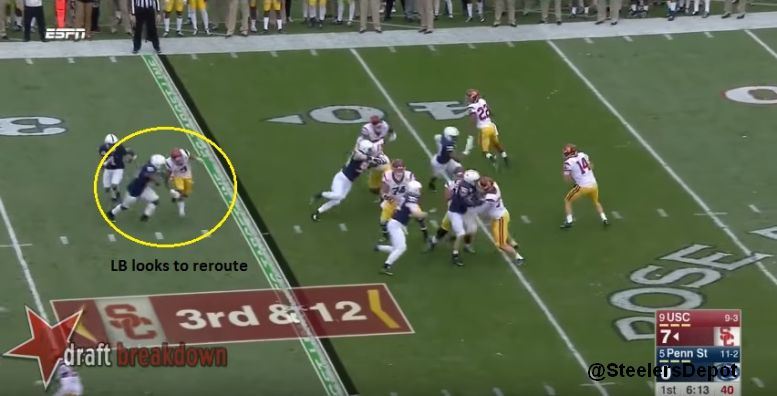 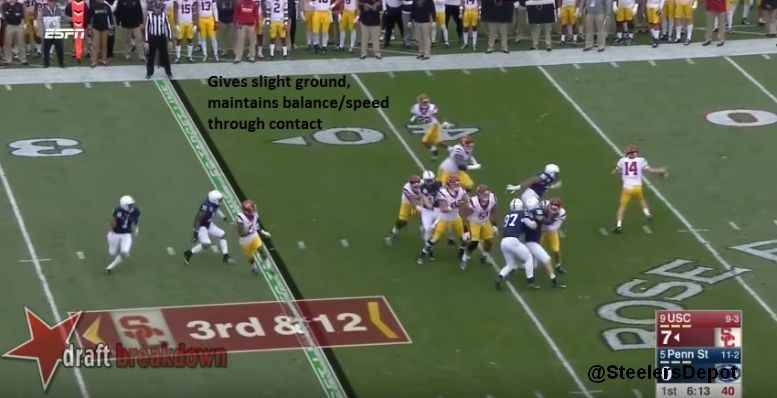 Just like a nickel corner, a slot receiver is going to have to be physical and an asset in the run game. Smith-Schuster checks that box with this hit alone.

And if you mention how this hit might be illegal, you’re missing my point. And what it means to be a Pittsburgh Steeler. But I saw that effort and his ability to crack safeties and stalk corners.

He can finish after the catch with good speed and size that makes it tough for him to be brought down. Another curl route here, running through the arm tackle of the DB and then bouncing off another one downfield before stretching out into the end zone.

Sure, there’s some shoddy tackling going on but that’s influenced by his size. You think defenders try to tackle Smith-Schuster the way they would Rogers? And you think Rogers could bounce off it the same way?

Now, it all isn’t sunshine and roses with him. There’s still some detail he’s gotta work on, he had trouble with his depth on slants vs Penn State, and bigger corners can beat him up on the outside vs inside releases. Here’s an example at the bottom of the screen, having issue getting off the line cleanly on this post/wheel.

But he won’t see those types of corners in the slot so it’s an avoidable issue. He checks every box to be a great weapon in the slot.

1. High football IQ, ability to get himself open and find grass
2. Toughness and hands over the middle
3. YAC ability with size and good speed
4. Experience playing inside

He’ll be another dynamic weapon in an offense chalk full of them. He’s going to offer that vertical threat with his stride length, size, and decent speed, to push vertical, be that threat downfield Rogers isn’t, and help open things up underneath.

I don’t know how defenses are going to stop it. Smith-Schuster will give Rogers a real push for playtime inside. Second round picks don’t sit very long these days.

My brief scouting report on him, though I encourage you to check out Sean’s breakdown on him over here.

The Good: Good size with length and big hands (32 7/8 inch arms, 10 1/2 inch hands)…good feel for soft spots in zone, works well in scramble drills, and shows ability to settle and show QB his numbers…runs away in man coverage, works back to the ball, high effort player overall who is detail-oriented, especially for a 20 year old…solid hands and the ability to make difficult catches downfield, wins 50/50 balls…shows ability to stack cornerbacks on vertical concepts and use size to box out…size makes it tough for him to be brought down and though isn’t elite, shows YAC threat ability, also isn’t easily rerouted….takes pride as a blocker, flashes violence and effort there too…experience on outside and in the slot…productive career, especially in 2015

The Bad: Not an elite athlete and isn’t the type the Steelers normally are interested in…will have to get better defeating press with his hands and not just his feet and shoulder dips…will have to be quicker making move in stem of his route…has to make minor improvements on initial depth of routes, struggles on slants but fixable…will have to be a more nuanced route runner in stem and at top…down senior year statistically when compared to 2015.