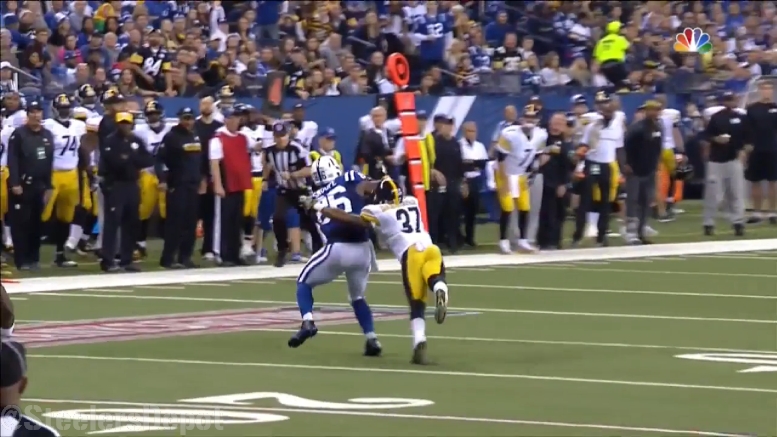 It’s been a long time coming, but first-year safety Jordan Dangerfield finally had a ‘season’ to write about in 2016. The Towson product was originally signed as an undrafted free agent in 2013 and spent three unsuccessful years in the NFL trying to win a roster spot, including two with Pittsburgh, before finally managing to do so last year.

Although not particularly big—listed at just under six-foot, 199 pounds—Dangerfield earned himself a reputation of being a big hitter, many of which were scattered throughout the past several years’ worth of preseason tape.

A combination of performance and opportunity—and special-teams tackles—finally allowed him to make the jump from practice squad to game-day roster in 2016, and he even got an opportunity to start early in the season.

Prior to Sean Davis entering the lineup, it was Robert Golden starting. Davis was still working in the slot, prompting Dangerfield to get the call to start at safety, and he played comfortably above the line, registering nine tackles in two games.

By the end of the season, after Davis entered the starting lineup, it seemed as though Dangerfield even passed Golden as the top backup safety whenever one of the starters missed a handful of snap in the middle of a game.

And to think, Dangerfield’s journey nearly ended in 2015 when he was a pre-camp cut, only to be re-signed later due to injuries at safety. He made the practice squad and spent all year there, and earned a spot on the 53-man roster a year later.

In spite of the fact that he is technically going to be a second-year player in 2017, he has already been around the league for four years, so it’s no surprise to learn that he has already turned 26. Even though he was able to start a couple of games last year, we are probably not looking at a player who is going to emerge as a future starter heading into his late 20s.

That said, I like what Dangerfield brings to the table quite a bit and I think the Steelers do to—after all, they wouldn’t have kept bringing him back if that were not the case. He is a quality player on special teams and has shown that he can also contribute on defense.

For the time being, there really is no financial risk, as he is going to be on board for making about as low a salary as a player can possibly make in 2017 in the NFL on a 53-man roster. That is assuming he makes the roster again, but I expect he will. After all, he may have passed Golden on the depth chart already for the number three spot.