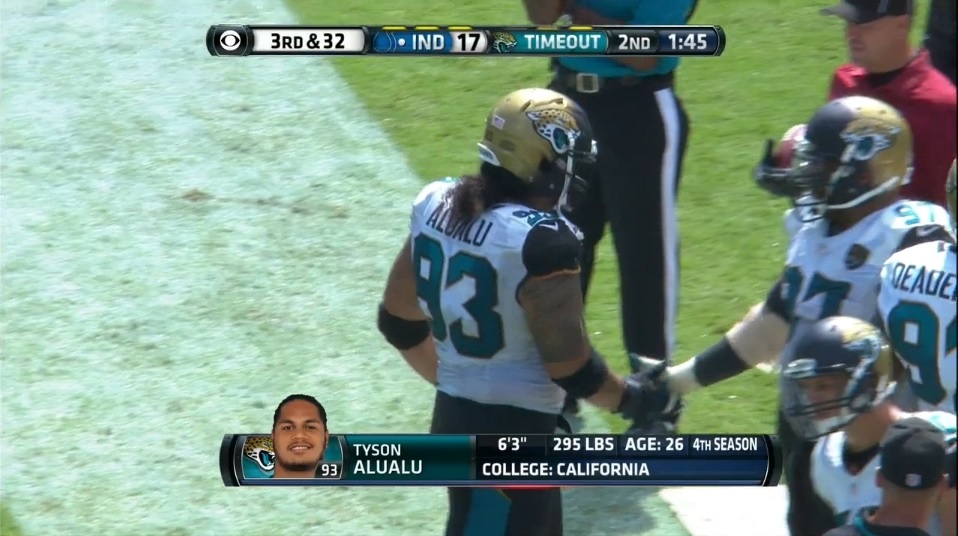 With the Pittsburgh Steelers enjoying a busy start to the week, so am I. We’re back breaking down he newest Steeler, DE Tyson Alualu. As always, we’ll tell you the good, the bad, and how you can expect him to fit in Keith Butler’s scheme. We’ll break it down into three categories: run defense, pass rush, and how he can be used in this defense.

Alualu Against The Run

He’s a strong two-gapper who holds the point of attack well overall. He’s not a playmaker or a great one-gapping penetrator but L.T. Walton-ish against the run. What I like most with Alualu is the one trait I remember about him coming out of college – his motor. He gives great chase to the football and runs down plays when the ball goes away from him.

This is just one example of many I have in my notes.

The Good: Good frame with length (33 inch arms) especially relative to height (6’2/3). Big lower half with impressive overall strength. Does well when asked to two-gap and able to hold the POA. Strong punch and proper hand placement. Flows well laterally against zone schemes. Love his effort, chases the ball when it’s away from him and takes away the backside cut. No loafs.

The Bad: Only average off the ball. Not going to be as successful when asked to one-gap, not much of a penetrator. Won’t make a ton of plays in the backfield unless he’s matched up against a tight end where he has the size/strength advantage. Can pop up too high out of his stance, lose leverage, and get washed out against the run.

Alualu As A Pass Rusher

This was the more important question for me to explore. The Steelers have three strong run-stuffing defensive ends. Stephon Tuitt, Cam Heyward, and Walton. Tuitt and Heyward are obviously much more but that’s not the point I’m trying to make. My hope was for the team to bring in a pass rusher, even someone as a career three tech, for depth because Walton offers nothing in that regard and the team has pretty much said as much.

I knew Alualu’s stats weren’t that strong, 17 sacks since 2010 (he is credited with 17.5 but a half sack against the Raiders in 2013 doesn’t seem to actually exist) but he seemed like the three tech-type that would fit what I wanted.

My thoughts after watching the tape? I’m a little underwhelmed.

There’s one caveat though. We’ll get into this later but he kicked out to play 5 tech a lot more in 2016 and I *think* he added weight from where he was earlier in his career, when he was playing the three. Maybe that sapped him of his athleticism.

Last year in Jacksonville’s 4-3, he played a lot of defensive end, and that’s a role he simply isn’t well-equipped for. Not nearly a good enough of an athlete, his length is mitigated against big, long tackle, and he isn’t an advanced enough pass rusher with any real go-to move, his bull rush is his best, to make an impact. Here he is as the RDE getting run upfield with ease.

Since 2012, I counted up all his sacks and where they took place. Five of them came as a 5T/4i and seven of them came as a three tech. From both spots, each had their effort/hustle/coverage type sacks so they weren’t all created by Alualu’s pass rush ability.

Here’s arguably his best one, showing strength on his punch and heavy hands, literally tossing the Colts’ center aside and sacking Andrew Luck. To be clear though, this came all the way back in 2013.

But that’s the best way he wins. Over the last two years, he didn’t have a go-to move and even on the interior, gets stuck too often. He’s the three tech in the clip below.

And my scouting report on him as a pass rusher.

The Good: High effort who doesn’t give up on the play. Shows a strong punch, heavy hands, and can knock OL off balance. Better on interior linemen where length and strength can win and average athleticism minimized. Seemed to play at lighter weight as a 3T, earlier in career, and more athletic. High football IQ who gets his hands up in throwing lanes when he can’t get to the quarterback.

The Bad: No real go to move, bull is probably his best. Gets stuck on blocks on the edge especially and can struggle to disengage inside vs OGs with length/strength to match. Sack production minimal throughout. Will have more success on the interior, struggle on the edge vs OTs. Rare to win unless OT gets off balanced on his bull rush. Taken off the field in pass rush situations (3rd and long, 2 minute drill) because it’s not his strongsuit.

He was a three tech for most of his career. I charted his game in 2015 against the Buffalo Bills of where he lined up each snap. The results.

Compare that with these three games from 2016.

When the Jaguars put a heavy investment in their defensive line, most notably by signing Malik Jackson to a mega-deal, Alualu was left without a home. Kicked him outside and like I said earlier, I think was asked to add some weight. He doesn’t look like the athlete he was three years ago though of course, he is older too.

He’s also played on offense, seeing 37 snaps over the past two seasons. That’s come at fullback and they even handed the ball off to him once, though he was stopped short on 4th and inches. He’s obviously a big body who can clear the way as a lead blocker but struggles to stick on contact and can be as much a liability as an asset. As much fun as it is to think about using him like Doug Legursky, he shouldn’t replace Roosevelt Nix. Some diamond-type formations with both in the backfield though? Now there’s an idea.

I still certainly don’t mind the addition and at the least, will allow the Steelers to go through the draft without needing or wanting to draft a defensive end, freeing up a spot elsewhere. I felt a little disappointed by him as a pass rusher but he’s definitely an upgrade over Walton. He’ll win with power and effort and I sorta hope John Mitchell gets him to drop 5-7 pounds to be a tick quicker.

He’ll be able to play as the five tech in base defense more than I thought he would, possessing the length and showing the strength to hold the POA. With the makeup of the Steelers’ defense, he won’t be asked to do so a lot provided everyone stays healthy but it’s an option, and he’ll carve out a role as a decent, not great, three tech in their 2-4-5 nickel.