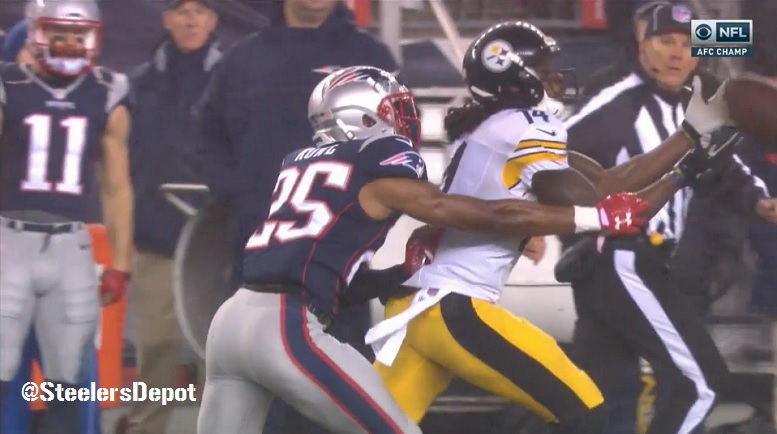 Young Pittsburgh Steelers wide receivers Sammie Coates and Cobi Hamilton both failed to contribute when it mattered the most in Sundays AFC Championship loss to the New England Patriots in the AFC Championship game as both had big drops on deep passes in the first half that really could have impacted the game. On Tuesday, Steelers head coach Mike Tomlin was asked what he learned about the two young wide receivers in that game during his end-of-the-season press conference.

After a productive start to the 2016 regular season that included him catching 19 passes of which 5 gained 41 yards or more, Coates’ offensive contributions dropped off significantly as he only caught two more passes for 14 yards in the Steelers final 11 games. While a few busted fingers that he suffered in the Week 5 game against the New York Jets probably explains his drop in playing time from the middle of the season and on, they didn’t prevent him from playing on special teams.

The few times that Coates was targeted in the passing game after originally sustaining injuries to his fingers he dropped a few of them and failed to fight the football on a few others.

Coates expects to have surgery on his fingers during the offseason so hopefully that will help him get back on track. Regardless, he’ll have quite a bit to work on during the coming weeks and months.

As for Hamilton, who was promoted to the Steelers 53-man roster from the team’s practice squad roughly midway through the regular season, while he did register some key third down catches from that point forward, he’ll still have his work cut out for him when it comes to making the final 53-man roster in 2017. In fact, he might very well wind up battling Coates for a roster spot in training camp should fellow wide receiver Martavis Bryant stay out of trouble with the league office and ultimately get himself reinstated.

“Man, I appreciate their contributions, Tomlin said of Coates and Hamilton on Tuesday. “Those guys have to continue to grow, get better and find a more consistent level of performance. But that’s the same for all young guys. I’m appreciative of the ground that they covered. But at the same time, I’m going to challenge those guys to continue to grow. And I think it’s reasonable to expect that to occur.”