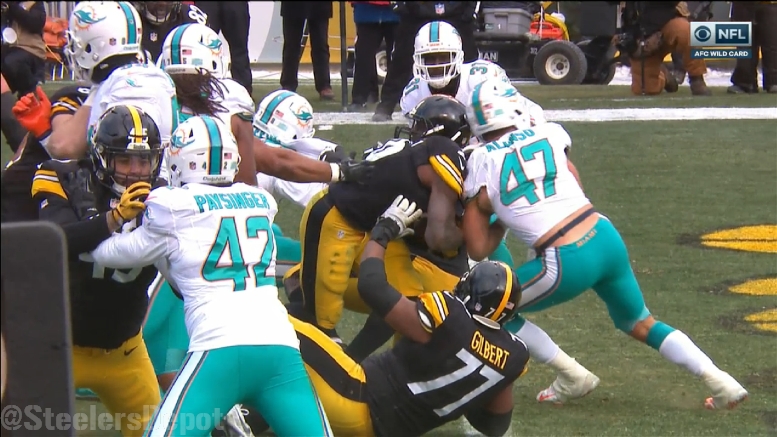 Yesterday morning, I asked the question about whether or not the Pittsburgh Steelers’ Killer Bs—their offensive triplets consisting of quarterback Ben Roethlisberger, wide receiver Antonio Brown, and running back Le’Veon Bell—would dominate the way that they ought to in their debut postseason game, given that they had never gotten the opportunity to do so in their first three seasons together.

I think we got a pretty emphatic answer from that group in their 30-12 victory over the Miami Dolphins. Both Brown and Bell scored twice in the game, which is the first time in their playing time together in which both were able to score multiple touchdowns in the same game.

Although the game didn’t exactly end the way that Roethlisberger would have cared for—he ended up throwing two interceptions and injuring his ankle at a stage in the game in which many, perhaps the majority, believe he should have been on the sideline—he was impressive early on, and commanded the offense.

He completed his first 10 or 11 passes in the first half for the vast majority of his 197 yards, but he only threw a total of 18 passes over the course of the entire game, understanding based on the scoreboard and the overall feel that the reliance upon the run game was warranted.

Roethlisberger said after the game that he was given a lot of run-pass options, and he frequently chose the run option—which was a good call, considering that Bell had statistically the best day as a runner in the postseason in franchise history.

Bell finished the game with 167 rushing yards on 29 carries—adding another seven yards on two receptions—and two touchdowns in the first postseason game of his career. In doing so, he broke Franco Harris’ 42-year old franchise record when he ran for 158 yards back in 1975.

He picked up chunks at a time during his best period of the game, including a pair of explosive runs of 25 and 26 yards, but it was Brown who had the most explosive impact, as his early performance in the first quarter set the tone for the remainder of the game.

The Steelers’ first two drives were short ones, because Brown shortened them for the offense. From the 50-yard line, he took a screen pass the distance up the left sideline after manipulating the defenders to allow his blockers to get into place.

On the next drive, from Pittsburgh’s 38-yard line, he beat the cornerback to the inside, making him miss on the tackle attempt before turning the corner around the safety, going the distance for 62. His two touchdowns of at least 50 yards in the first eight minutes outscored the Dolphins all told on the day.

Of course, there is a mild sense of foreboding heading into next week’s game against the Chiefs, because Roethlisberger suffered an ankle injury late, as mentioned. The Steelers have had an awfully difficult time keeping their trio healthy in the playoffs, or for the playoffs, in recent years. But for this game, as least, the Killer Bs stung their opponents.