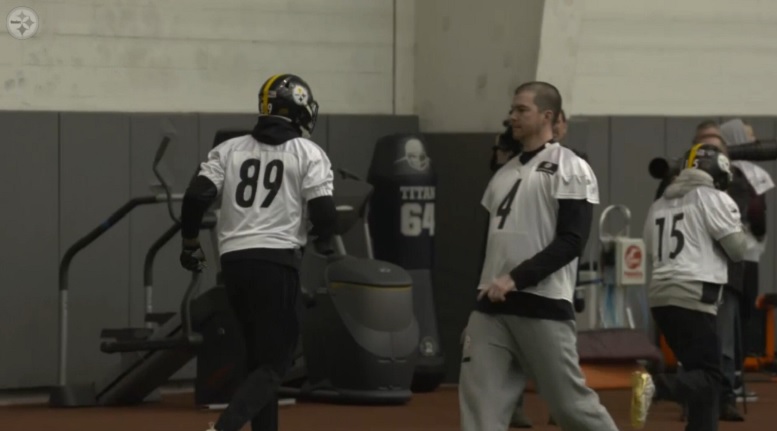 The Pittsburgh Steelers were able to get tight end Ladarius Green back on the practice field Friday on a limited basis and he ended the week listed as questionable for Sunday’s AFC Championship game against the New England Patriots. Green was surprisingly allowed to talk to the media on Friday and that hasn’t happened in quite a while.

“It was good to finally be back here in practice, but just got to keep going with it and see what happens,” said Green, who admitted that he didn’t do too much during Friday’s practice.

After Friday’s practice, Steelers head coach Mike Tomlin said that while Green had a great day, he’s still in protocol.

Green, who looked like he might play a few weeks ago in the Wild Card game against the Miami Dolphins, had what appeared be a setback during the final practice that week. He was asked Friday if he indeed did have a setback after practicing fully the two days prior to that game.

“Yeah, I was still in protocol,” Green said. “I was just out there, it was just part of the rehab, so it wasn’t anything towards the game.”

While Green admitted Friday that he’s indeed frustrated that he hasn’t been able to play since suffering his concussion in the Steelers Week 15 game against the Cincinnati Bengals, he has no ill will toward safety George Iloka, the player that issued the hit on him in that contest.

So, does Green think he’ll ultimately play Sunday against the Patriots after ending the week listed as questionable?

“That’s not my decision,” Green said. “That’s for the coaches. Coaches talk about that, so, I don’t know.”

Green was later asked if he knows what needs to transpire in the next 48 hours in order for him to possibly play against the Patriots.

Green, who spent most of the regular season on the Steelers Reserve/PUP list to reportedly rehab a surgically repaired ankle, was asked Friday about that part of his body.

“The ankle’s great,” Green said. “Way better than I thought it was going to be. It’s holding up great.”

Because Green was allowed to talk to the media on Friday he was asked if that means he’s no longer in protocol.

“You all are talking to me because I practiced,” Green said.

So, is Green still in protocol like Tomlin said after Friday’s practice? It’s really hard to say at this point and especially when you look at the Madden Rule which stipulates that players who have been diagnosed with a concussion aren’t allowed to speak to the media until they are medically cleared.

Regardless of whether or not Green plays Sunday against the Patriots, it goes without saying that he still hopes to return to the field.

“Of course I want to play, but I’m just still taking it day by day and seeing whatever the coaches tell me to do,” Green said.

Ladarius Green talks about his health, and getting back on the field with his teammates. pic.twitter.com/QvKIOePWWq