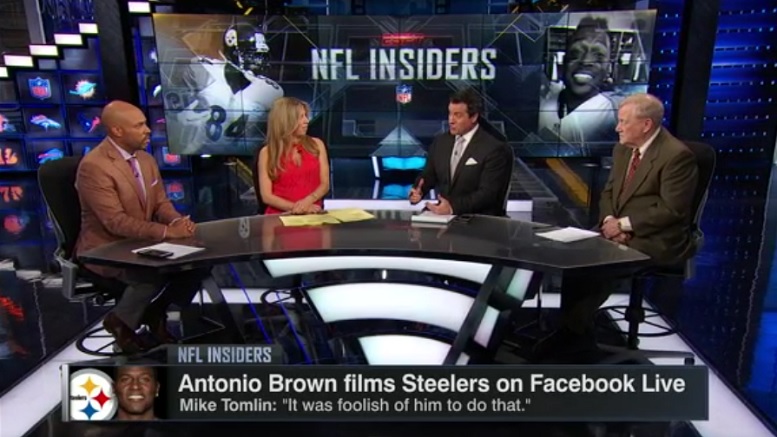 Pittsburgh Steelers head coach Mike Tomlin spent a lot of time during his Tuesday press conference addressing the locker room video that wide receiver Antonio Brown posted Sunday night following the teams win over the Kansas City Chiefs and with good reason. While Tomlin said quite a bit about Brown’s situation on Tuesday and how the team will move forward after it’s addressed internally, it seems like all two major media reporters chose to focus in on Tuesday afternoon is just part of what the head coach said.

So, which part? This one below:

“He is a great player,” Tomlin said of Brown. “He is a hardworking player. He is respected, largely, in the locker room for those things. But incidences such as this don’t help him in that regard. That’s just the reality of it. In a nutshell, that’s going to be the gist of the conversation that we have and the reality is, those things don’t apply exclusively to Antonio. It’s a global thing in regards to professional sports. I think that’s why oftentimes you see great players move around from team-to-team and I definitely don’t want that to be his story. I am sure he doesn’t want that to be his story.”

During the Tuesday edition of ESPN’s NFL Insiders, analysts Jim Trotter and Dan Graziano set the internet ablaze with their comments centered around that part of Tomlin’s response.

Graziano was first up.

“That quote about why this is why great players bounce around from team to team, Antonio Brown is a player that’s looking for a huge payday, a big-time contract, when his current deal is up and probably looking to extend his contract this offseason,” Graziano started. “So, you now have a situation where the Steelers – you heard Tomlin refer to things that aren’t preparational football-related, this isn’t a one-time thing with Antonio Brown. They’re upset with him for 15 yard penalties he gets for end zone dances, those kinds of things.

“So, they want drive this point home and if you’re Antonio Brown, and you hear that, and you don’t get the message like, I’ve got to change some things about myself if I want to be part of the long-term situation here, then you’re never going to get it.”

Trotter then added on to those comments.

“And you heard that on a team that’s deep with wide receivers, too, so as great as Antonio is, the one thing that we’ve seen about the Steelers in the past, they’re not afraid to move on from great players, or have been productive for them,” Trotter explained. “Go back and look at Santonio Holmes, go back and look at Mike Wallace, they will move on from wide receivers. Kevin Colbert does a great job at bringing in receivers there.

“But my takeaway from all this more than anything is just that trust factor of the locker room. You don’t violate that and clearly that was violated here. It’s not going to be distraction as Bill [Polian] said. But just in terms of that relationship, Mike Tomlin wants to put forth a certain image to the public and there’s a different image to the public than there is to your players at times. That’s a private time, it shouldn’t have been out there.”

So, Graziano and Trotter are both somewhat suggesting that the Steelers might move on from Brown in the coming months and the latter is basing that off of what happened with Santonio Holmes and Mike Wallace.

First, Holmes was facing a four-game suspension and entering the final year of his rookie contract when the Steelers decided to trade him to the New York Jets for a bag of footballs and a ham sandwich. It made sense to do that at the time as the Steelers probably had no intentions of re-signing Holmes anyway. Oh, and let’s not forget that the Steelers eventually traded that fifth-round draft pick they received from the Jets for Holmes to the Arizona Cardinals in exchange for a sixth-round pick, which they ultimately used to draft Brown. Details, people, details.

As for the Steelers parting ways with Wallace, they let him leave via free agency because he wanted way too much damn money. How did that work out for the Miami Dolphins, the team that Wallace ultimately signed with? Oh, and the Steelers also received a third-round compensatory pick for losing Wallace.

In short, Trotter using Holmes and Wallace as past examples as to why Brown might also be jettisoned during the upcoming offseason wasn’t well thought out.

Trotter also talked about the Steelers being deep at the wide receiver position as being another reason why the organization might be inclined to move on from Brown. Hey, I like Martavis Bryant, Eli Rogers, Sammie Coates, Darrius Heyward-Bey, Cobi Hamilton, and Demarcus Ayers as a solid group as much as the next Steelers fan, but let’s make one thing clear and that’s that none of the six are likely to be able to singularly replace the production of Brown.

As for Graziano’s comments, he’s right about Brown and his contract situation. In fact, everybody should expect Brown to very disgruntled if he doesn’t have a very lucrative contract extension done by the start of training camp. He’s earned it.

Would the Steelers really trade Brown during the offseason? Yeah, I highly doubt it and there’s multiple reasons as to why I think that. For starters, any team that would trade for Brown would have to come off a first-round draft pick at the very least. Additionally, that team would then be trading for a player with just one year remaining on his current contract and one who is looking to be the highest-paid wide receiver in the league. That’s a lot of leverage for Brown when it comes to dealing with a team that has at least one first-round draft pick invested in him.

On the Steelers side of things, trading Brown prior to June 1 would result in a 2017 dead money charge of $8,908,334. Sure, the Steelers would ultimately save $4.71 million in 2017 salary cap space when you look at the bigger picture, but why do that? Is he really that big of a cancer because he streamed his coaches post-game team address in addition to getting a few celebration penalties? I think not. He’s the hardest working wide receiver in the league and as far as I know, never failed a drug test or been arrested.

Look, what Brown did on Sunday was wrong and it certainly violated the proverbial locker room code. He’ll be punished for his actions behind closed doors and I doubt it will ever happen again. He’ll likely be fined heavily by the league as well and should be.

So, why did Tomlin say what he said about Brown when it comes to the reason why great players sometimes bounce around from team to team? I think he just wanted to send a global message as I really didn’t view it as being a threat. Maybe you disagree.

In summation, I think Graziano and Trotter both really missed the mark when it comes to dissecting Tomlin’s Tuesday comments on Brown.