Sunday’s matchup against the Kansas City Chiefs will be the tenth occasion in which Pittsburgh Steelers quarterback Ben Roethlisberger will meet a regular season foe again the post season under coach Mike Tomlin.  Including the victory over the Miami Dolphins last weekend, Roethlisberger has compelled a 6-3 record in postseason rematches under Tomlin and has improved his performances as he’s aged. 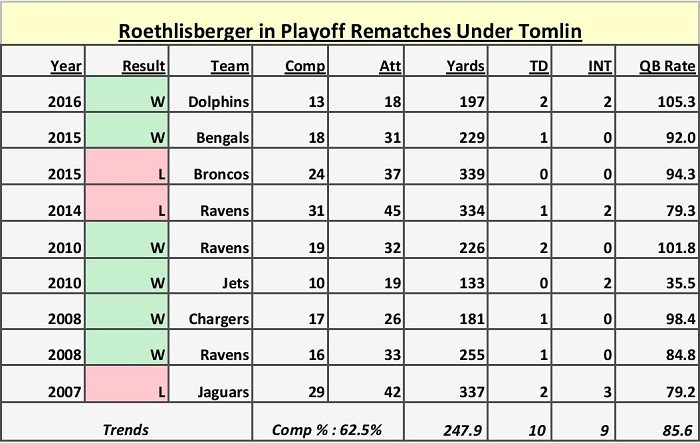 Looking at the matchups above, there are a couple ways to infer Roethlisberger’s splits above. His overall numbers show a 62.5 completion percentage, 10 touchdowns to 9 interceptions and a middling 85.6 passer rating. Very pedestrian looking numbers for the Steelers’ quarterback overall, but as you may note, all three of those losses came when Roethlisberger was forced to play big and not balanced.

In the losses to the Denver Broncos, Baltimore Ravens and Jacksonville Jaguars, Roethlisberger found himself alone on offense, without his starting running back and in last year’s case, also his starting wide receiver. Roethlisberger was forced to attempt to win the game on his own with a ‘Big Ben’ performance and not a ‘Balanced Ben’ performance.

Unfortunately for the Steelers, a Big Ben performance often sends them home. The Steelers are 0-3 when Roethlisberger throws for over 300 yards in the post season. To no surprise, all three of those losses came with the Steelers’ starting running back on the shelf.

Expecting Sunday’s game plan to include Roethlisberger forcing the Chiefs pass defense into submission like their earlier meeting, in which the quarterback threw for five touchdowns would be a mistake. A big – high yardage game for Roethlisberger likely means desperation which spells trouble for the team’s chances at victory.

The Steelers and Roethlisberger have a proven formula for getting the last laugh on teams that they are fortunate enough to see twice. A victory for the Steelers will mean that Roethlisberger’s stat line will reflect similarly to last week’s game plan. Enough to get the job done before handing off to Le’Veon Bell to close the deal.

When it comes to Roethlisberger’s playoff performances against familiar opponents, it is important to keep in mind that bigger is not always better.