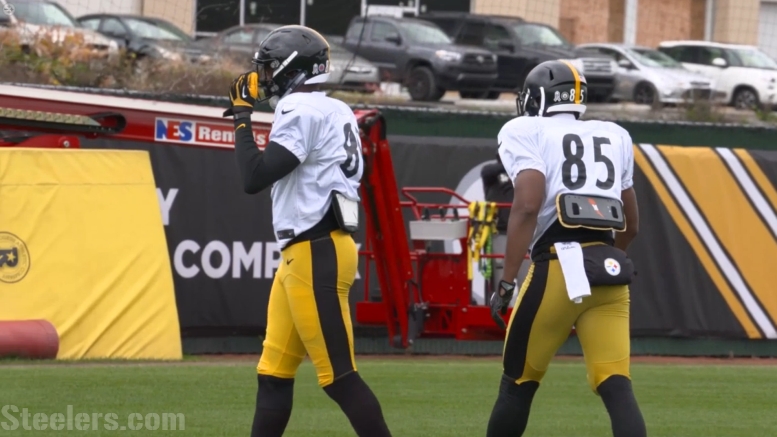 I think the next few days could be rather interesting for Pittsburgh Steelers first-year tight end Xavier Grimble. He could be losing his roster spot as early as tomorrow. Or, come Sunday, he could see himself returning to the field as an offensive contributor after being absent for the past three games.

Grimble’s position is in a bit of a murky spot since Ladarius Green has emerged over the course of the past four game since his activation from the Physically Unable to Perform List. It can be argued that he only made the roster because of Green’s injury, initially, but he made some contributions early on, including a touchdown, that may have helped him stick around.

But he recently dealt with an injury that had him sidelined for two games, and, on Sunday, even though he technically was on the active list and in uniform, he did not get on the field in spite of the fact that the Steelers heavily used three tight ends at a time during the game, whether that was the other three tight ends on the roster or an extra offensive lineman.

While I have in the past expressed my support for Grimble, I have also at times been vocal of the very real implications of Green’s emergence, as the $20 million tight end is in many ways a rich man’s version of what the Steelers were looking at in Grimble, or the X-Man as his teammates refer to him.

But I did find a recent comment by one of his teammates—none other than quarterback Ben Roethlisberger—pretty interesting, and it has me thinking about what the offense is planning for him going forward, if anything.

During his usual radio spot, Roethlisberger talked about a number of topics, as usual, but, while discussing Sammie Coates, he was also explaining how the game plan dictated certain things, including a heavy usage of tight end personnel.

Roethlisberger expressed his fondness for the versatility that the 12 formation gives the offense, which they have been using much more frequently in recent weeks since Green’s promotion to the active roster, saying that “it gives us a lot of options to run and pass”.

Right after saying that, he volunteered a laudatory statement for Grimble, saying, “hopefully getting X-Man back will give us more options as well”. The Steelers already have and use five different bodies along the line of scrimmage and in the backfield to provide these ‘versatile’ looks, including their fullback and an extra lineman.

It would be hard to imagine them being able to coherently work in four different tight ends, even if they each bring to the table a slightly different skill set. Roethlisberger’s comment suggests that he at least would like to continue to see Grimble as a contributor.

The reality of a 53-man roster, and the potential need to promote a defensive end for Sunday’s game, however, may result in him being waived in order to make room.