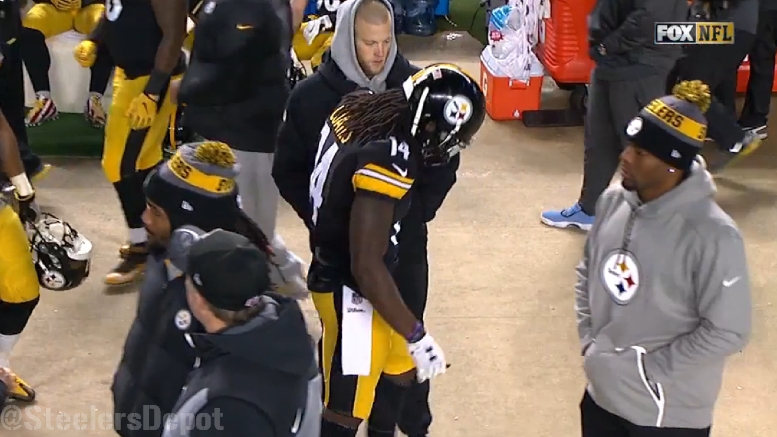 In the Pittsburgh Steelers Sunday win over the New York Giants, second-year wide receiver Sammie Coates wasn’t targeted in the passing game and only played a total of 4 offensive snaps. That was a bit surprising being as it was starting to look like Coates might be infused back into the offense once again now that he’s seemingly overcome the two broken fingers on the same hand that he suffered way back in Week 5.

During his Tuesday interview on 93.7 The Fan, quarterback Ben Roethlisberger was asked if Coates will potentially be a bigger part of the offense this coming Sunday in the team’s road game against the Buffalo Bills

“He’s growing, he keeps doing more things, he’s coming back to us,” Roethlisberger said of Coates, who has just one catch for 4 yards since suffering his injury. “His hands are getting better. It’s not easy to be a wide receiver and have two hurt fingers on the same hand. So, he’s doing some great things on special teams and we targeted him a couple of times in Indianapolis.

“This week [against the Giants], it’s just the game plan wasn’t really there, or the calls weren’t there to get him the ball. We worked the middle of the field because they were taking A.B. [Antonio Brown] away and taking the outside away. And so there were just times that we had a lot of two tight ends sets, three tight end sets, and that’s what we can do having Jesse [James] and D.J. [David Johnson] and Ladarius [Green] on the field at the same time. It gives us a lot of options to run and pass. Hopefully getting X-Man [Xavier Grimble] back will give us more pass options as well. So, having those different sets really is what does it more than lack of having a guy out there in Sammie.”

While the Steelers are using quite a few two and three tight end sets, when they do use three wide receiver sets, Cobi Hamilton and Eli Rogers have mostly been the ones on the field along with Antonio Brown. Hamilton, while not really a deep threat, has made a few big catches ever since being promoted from the team’s practice squad several weeks ago, and several of them have come on third downs.

During his Tuesday interview, Roethlisberger was asked to explain why it’s more useful for Hamilton to be on the field over Coates and his answer was quite intriguing.

“When he [Coates] comes on the field, teams are like, ‘Ok, here’s their deep ball guy, let’s take away the deep ball,'” Roethlisberger explained. “So they’ve been looking and knowing, ‘We see him in the game, they’re rotating him and Cobi, they take shorts with Cobi, but when No. 14, Sammie Coates comes into the game, we need to be ready for a deep ball.’

“So, part of it is the defense seeing him coming in for certain situations, but so what that tells me, and tells us, talking to the coaches and an offensive person, is that we need to continue to use him in multiple areas and multiple ways so that we can not give those tendencies away.”

In short, it really seems as though the Steelers view Coates as just a one-trick pony right now and one that has problems catching the football to boot. Until he starts developing other aspects of his route running and becomes a more complete wide receiver, it sounds like his playing time on the offensive side of the football will remain very limited.