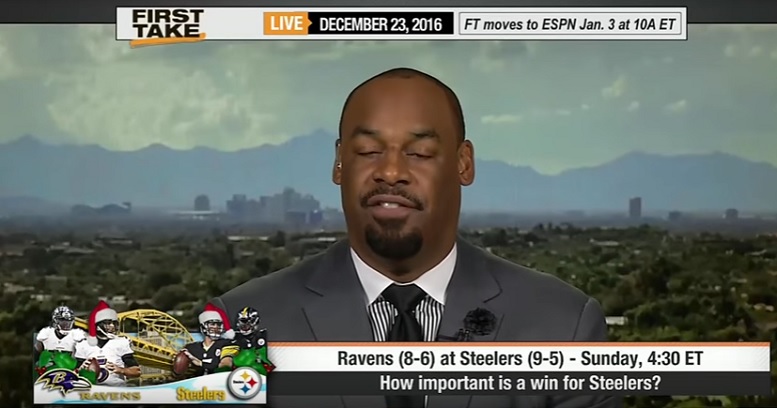 Former NFL quarterback Donovan McNabb must have finally gotten around to watching a few of the Pittsburgh Steelers games from this season, or at least one of them.

Just two weeks after saying Steelers running back Le’Veon Bell “isn’t as good as he used to be,” McNabb backtracked from those comments on the Friday edition of ESPN’s ‘First Take.’

“Le’Veon Bell is back healthy and is one of the best — if not the best — running backs in the game, and I think they feature him a little bit more to attack that defense,” McNabb said of Bell and how he thinks the Steelers will use him Sunday at home against the Baltimore Ravens. “Now, the Baltimore Ravens defense is one of the best defenses versus the run, and they will continue to get a little bit more than they expect from Le’Veon Bell.

“But what does that do? It opens up the play-action game. Antonio Brown, you talk about [Ladarius] Green at the tight end position, you talk about [Sammie] Coates, you talk about guys now getting more involved. And for a team that’s won five in a row at this particular time, momentum, chemistry and flow, it’s working in the favor of the Pittsburgh Steelers. They’re back healthy again.”

Well, while McNabb was right to reverse course when it comes to his opinion of Bell, perhaps he should have looked at the Steelers injury report this week as tight end Ladarius Green and wide receiver Sammie Coates are unlikely to play Sunday against the Ravens. As for McNabb’s change of opinion of Bell, maybe he was able to watch the Steelers game a few weeks ago against the Buffalo Bills. I digress.

If McNabb flip-flopping on Bell isn’t enough, he also changed his tune when it comes to who he believes will ultimately win the AFC North with two weeks remaining in the regular season. In case you missed it, two weeks ago, McNabb said the Baltimore Ravens would win the division.

“They [The Steelers] have elevated their game to playoff-type of play,” McNabb started. “Now, the Pittsburgh Steelers understand the magnitude of this particular game and I think they come out with that attitude. This is a game in which for rival games, all week you’ve been waiting for this opportunity to button your chinstrap up and play against the Baltimore Ravens and they can say the same thing in Baltimore. But when I look at Pittsburgh, everything works in the favor of the Steelers, and the deciding factor of this particular game is the health of Ben Roethlisberger.”

What a joke McNabb is as an NFL analyst.

If you want to see McNabb’s Friday comments in addition to Stephen A. Smith going off on another rant, you can do so below.