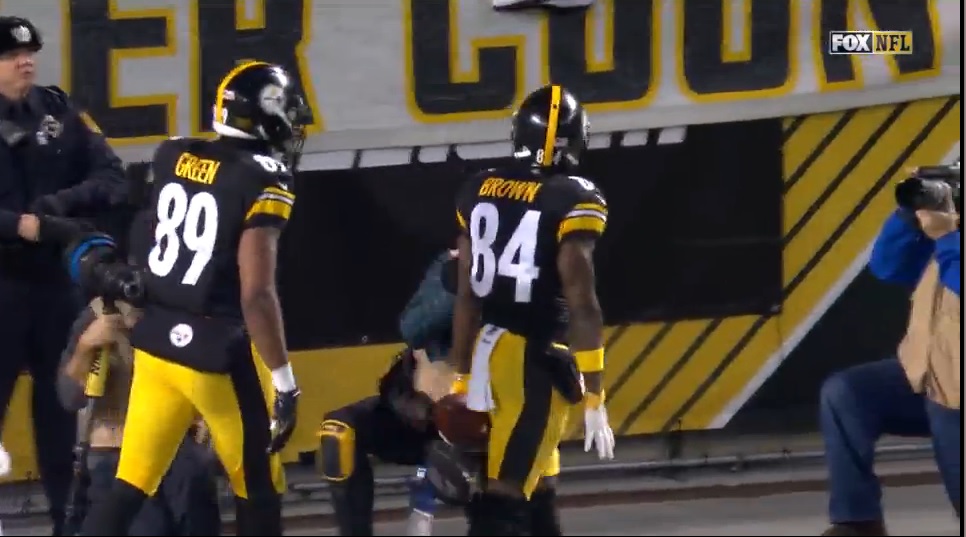 Red Zone Defense: This can go to everyone because the defense was incredible today. On a lot of different levels but specifically, situational football in the red zone and red zone fringe. If you count both, times where the New York Giants got the ball to at least the Pittsburgh Steelers’ 30, they only scored points – not just touchdowns – twice on six opportunities. The only blemishes came after Le’Veon Bell’s fumble that set the Giants up with perfect field position and the final, game-over drive of the game.

It’s a product of this team’s 7 shots series in camp and practice. Bouncing off their last performance against the Indianapolis Colts, the Steelers continue to do an incredible job in this area.

They entered today with the #1 red zone defense and will finish there again with an even more impressive mark. Probably around 40% for the year.

Ladarius Green: I think everyone can see why this guy was signed, even if it felt like eons before he stepped out on the field. It wasn’t perfect, he did have one clear drop and another 3rd down pass knocked away (and a pass interference call) but when you catch six passes for 110 yards and a score, you’re getting on this list.

He made big plays down the field which is the clear reason why he was signed in the first place. His touchdown was a result of scheme more than anything Green did but it’s still a positive regardless. His usage and comfort in the offense will only increase and that is a scary, scary thought.

James Harrison: I’d throw the cliche, roll the clock back ten years, line at you, but Harrison has been one to defy Father Time for years. He put the fear of God in left tackle Ereck Flowers today, getting him to false start, cheat, and hold, which led to the first points of the game for Pittsburgh.

Harrison officially finished the day with a sack, TFL, and three tackles.

Le’Veon Bell: His impact in the run game was mostly minimized but the Steelers won the war late, which is something Mike Tomlin praised the Giants for typically winning in. Tables were turned today and that should be a big storyline that may get lost in the shuffle.

Sean Davis: Talk about a couple of rookies settling in. Davis has taken huge steps the past three weeks to step up his play. He’s much faster because he’s comfortable and like Artie Burns, it’s allowing him to be more physical. He tied for the team lead with seven tackles, one for loss, a breakup, and oh yea, his first interception of his career.

Mike Mitchell: Both safeties were impressive today. Mitchell did his thing, laying out Will Tye, but he broke up two passes, which I know, was as likely as me moving out of mom’s basement. He’s been on fire the last two weeks.

Antonio Brown: Typical AB stuff. An insane toe tap, a crazy contested grab in the end zone, and he failed to catch just one of his seven targets. Another day at the office.

Lawrence Timmons: He was part of that group that led the red zone defense. An impressive INT early in the game, getting depth and leaping to take the ball away, and A gap pressure on a 4th down attempt that forced the ball out and an incompletion. He’s a spry 23 year old out there.

Randy Bullock: Fat Randy! Nice game. 3-3 on field goals, good kickoffs. For someone off the street, you can’t ask for much more than that.

Danny Smith: He’s making it hard for me to write good things about him. It’s not all his fault, there are some individual problems, and some weirdness (like AB not getting off the field), but the special teams were generally poor. Jordan Berry’s punts weren’t great, there were four accepted special teams penalties, and Antonio Brown couldn’t get under a punt to save his life.

Still several weeks to go and we’ll see how things shake up but I’d put his odds of returning this year at a coinflip, 50/50.

David DeCastro: It was a mixed day. Ben Roethlisberger was kept generally upright and DeCastro made at least one nice play on a trap block but yes, there were a couple penalties mixed in that backed the Steelers up and make things a lot harder. He has the far and away lead in penalties of the offensive line.