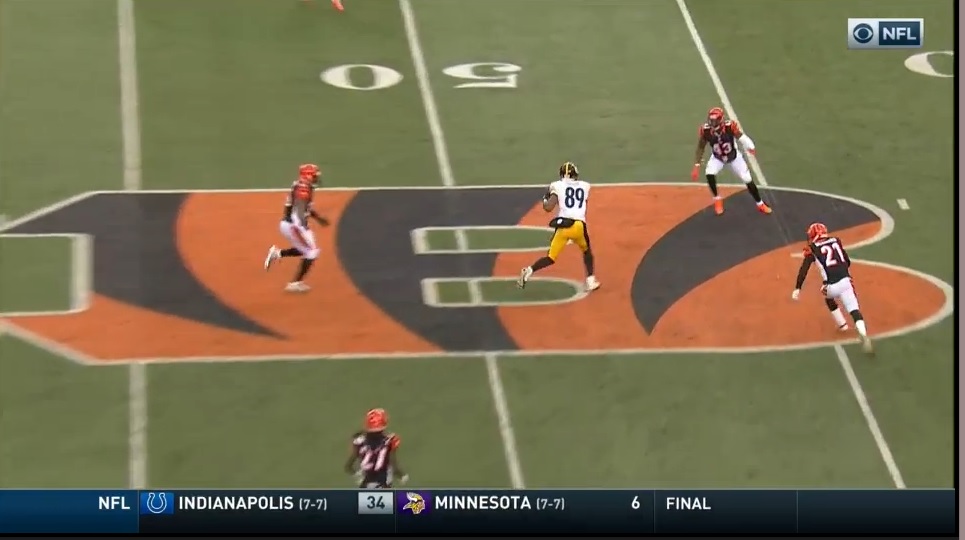 Oh my. What a game. Hard to even describe what that was.

Eli Rogers: For catching the game-winning touchdown. It was a great route from a second-year player, with shades of Antonio Brown we’ll point out in the morning. He added a 28 yard grab over the middle, diving and getting his hands under the football, earlier in the half.

As CBS pointed out in the broadcast, Ben Roethlisberger has told guys like him they don’t need to make 11 catches a game. Just capitalize on the 3-5 chances you get. And that’s what Rogers did.

Ladarius Green: Tough. From a guy a lot of people called soft, he made one of the game’s guttiest plays, going over the middle to make a crucial third down grab on the Steelers’ final drive. That’s not a fun place to be and he got rocked by George Iloka, one of the biggest safeties in the game. Green was forced out of the game with what’s probably going to be a concussion.

It’s a potentially big loss going forward but for today, you have to give him a lot of credit.

Roosevelt Nix: I know his impact wasn’t huge, his snap count pretty minimal, but when the Steelers needed ot breath some life back in their run game, they turned to 45. He paved the way for Le’Veon Bell, who finished with 93 yards on the ground, not too shabby considering how bad things looked after the first half.

Chris Hubbard struggled for reasons we’ll get to but it was a perfect scenario for Nix.

Le’Veon Bell: And of course, Bell himself for some tough running against a surprisingly successful front. His pass protection was also solid, an inadvertent chop block aside, and it’s not fun putting your face in the fan of Vontaze Burfict.

Ryan Shazier: The run defense got eaten up at points but Shazier played big. He was a large reason why the Bengals had their unsuccessful runs and his tackle on a swing pass in the second half, shedding the block and forcing the ball inside, was one of those that won’t get noticed but could’ve been really bad if Shazier didn’t make the play.

He officially finished with five tackles, one sack, two tackles for loss, two QB hits, and a pass deflection.

Lawrence Timmons: I don’t know what Andy Dalton or his center was thinking but Timmons made the turning point play of the game, happily accepting a lame duck throw aimed right at him in a then 20-12 Bengals’ lead.

The Steelers wouldn’t tie the game by that point but it was all Pittsburgh the rest of the way.

Chris Boswell: I know Roethlisberger bought his offensive line suits to thank them for their work but maybe Boswell should get fitted too. He was the entire offense until the end, tying a Steelers’ record with six field goals today. And they weren’t chip shots either. Five of them 40+ The longest, a trio from 49.

Some veered left. Some needed a slight breeze to push the ball over the crossbar. But they all went through. That’s what matters.

Mike Tomlin: There were definitely decisions I disagreed with, notably the two-point attempt in a 24-20 game. There’s no defending that one and I won’t try to.

But the Steelers were getting their butt kicked in this one. Or, as Tomlin pointed out, or anyone with eyes could tell you, they were kicking their own butt. It’s easy to wilt in that moment, at one point suffering 20-6. But true to the mantra, it was next man up, never-say-die attitude.

In a year where we’ve seen a whole host of teams just quit, give up, and roll over, the Steelers clawed their way back. And that deserved a kudos to their head coach, even if things weren’t always perfect, weren’t always pretty.

Sammie Coates: Coates got back on the field. That’s the good news. And that’s sorta where things end for him. Yes, the refs missed some facemasks and they were bad calls. But deep ball after deep ball came up empty and for such a big guy who legitimately has awesome talent to be a deep threat, he just isn’t physical enough to go up and snatch the football away.

Jesse James: James didn’t have a large role but missed on his lone target from Ben. Yes the pass was high but when your number is called, just as we referenced earlier, you gotta come through. Too many times in big moments, James has come up small.

Chris Hubbard: The idea of using Hubbard as a tackle-eligible has mostly worked but it’s tough versus a team like the Bengals. Too much length on the edges for a small-ish guy like him to deal with and he got controlled at the LOS pretty easily.

David DeCastro: His play hasn’t been as bad as some make it out to be bu there’s no denying the penalties are maddening and one reason why this team got behind. I’m not sure what the count is on him for the year but it’s probably in the 12-14 range, an absurd amount.

Kick Coverage: Not a good look, Danny Smith. Alex Erickson averaged 33.2 yards per return, capped by a 72 yard race that was saved by Chris Boswell’s strong fingers. There was a squib kick earlier in the game that probably got returned for more than it should’ve too.