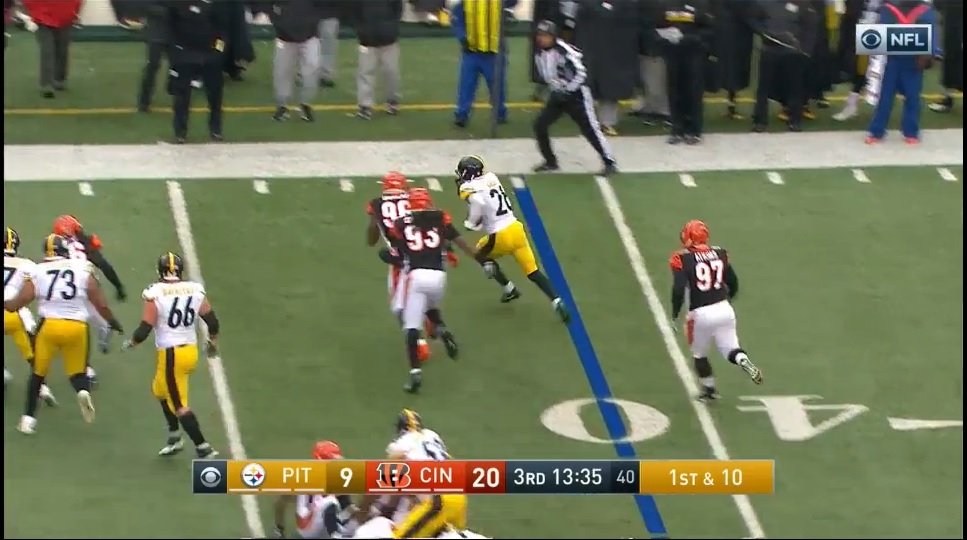 Sunday’s come-from-behind win over the Cincinnati Bengals makes it five straight wins for the Pittsburgh Steelers, who are firing on all cylinders in December, rolling towards yet another playoff berth and a possible AFC North division title.

Despite trailing 20-6 midway through the second quarter, the Steelers made some key halftime adjustments under Mike Tomlin and ended up slamming the door on the Bengals in the second half to pick up a much-needed win.

Like I do every week following game day, I’ll take a shot at trying to grade the Steelers by positional groups on their performances against the Bengals.

While Ben Roethlisberger was much, much better this week against the Bengals, he still tried to force some passes into questionable windows on Sunday. Fortunately for him, the Bengals simply couldn’t corral those passes into interceptions.

What Roethlisberger did do though was take what the defense gave him underneath in the second half, allowing the Steelers to march up and down the field for scoring drives to pull off the comeback victory.

One thing I really loved about Roethlisberger’s performance on Sunday was his keen ability to slide around in the pocket, buying extra time for receivers to work open across the field. Although he’s made a career out of doing that, I was so impressed with his feel for the pocket, knowing when to slide forward and side-to-side, helping his linemen out in the process.

Sunday’s game was a down game of sorts for Le’Veon Bell, the Steelers’ standout running back still nearly cracked 100 rushing yards for what would have been the fifth straight game, finishing with 93 rushing yards on the ground.

While he didn’t find the end zone on the day, Bell did pass Jerome Bettis for most yards from scrimmage by a running back in franchise history in his first four seasons.

In the passing game, Bell added five receptions for 38 yards, finishing with 131 total yards in the win.

The Bengals planned on bottling up Antonio Brown on Sunday, and for the most part they were successful. Although Brown had a touchdown wiped out by a terrible penalty call on Bell for a chop block, Pittsburgh’s star receiver finished with three receptions for 58 yards.

Normally, Brown’s low numbers would result in a loss, but fortunately for the Steelers Eli Rogers stepped up in a big way to carve up the Cincinnati defense in the middle of the field, finishing with five receptions for 75 yards and one touchdown on six targets.

Rogers displayed his great route running ability to shake free in the middle of the field and made some big-time catches in traffic on Sunday.

Along with Rogers, Cobi Hamilton continues to come up big on third down, hauling in a 21-yard pass to move the chains.

Sammie Coates finally got back into the mix on offense, hauling in just one pass for 10 yards, but Roethlisberger looked his way early and often, targeting four times overall.

The concerning news here is that Ladarius Green is in the concussion protocol with a big game coming up on Christmas Day against the Baltimore Ravens, but against the Bengals Green was a steady presence in the middle of the field, grabbing five passes for 72 yards on a team-high eight targets.

With Green in the mix, Roethlisberger was able to work the middle of the field against the Bengals, carving up a defense that has had trouble against Pittsburgh’s tight ends and slot receivers in recent years.

Along with Green, David Johnson continues to get looks in the passing game, hauling in his only target for 12-yard gain and a first down, while Jesse James had a high throw bounce off of his hands.

Look, I know this grade will probably irk some readers, and that’s fine, but Pittsburgh’s offensive line play on Sunday was average at best.

Far too often they gave up significant penetration and pressure to the Bengals’ defensive line, but fortunately for them Roethlisberger was able to slide around in the pocket to make plays.

In the run game, the Steelers went from dominating a week ago in the snow to struggling in Cincinnati, averaging just 3.3 yards per carry. Maybe that’s because Cincinnati was selling out to stop the run, but that YPC number is far too low for my liking.

Things looked ugly early as Stephon Tuitt left the game on Cincinnati’s first drive, missing the rest of the game, as Jeremy Hill and Rex Burkhead ran through some big holes created by the Cincinnati offensive line.

However, Javon Hargrave and Ricardo Matthews bounced back in the second half to shut down the Bengals’ running game, while LT Walton brought some much-needed energy off the bench up front to help get things going for the defense.

On the day, Pittsburgh’s defensive line recorded just three tackles on the day (no tackles for loss and no quarterback pressures/hits), but they were able to plug up holes, allowing the linebackers and safeties to make plays in the box in the second half.

Who says Lawrence Timmons is declining?

For the second time in three weeks Timmons came up with a big interception in zone coverage and even added a thunderous hit at the goal line in the first half to keep Hill from crossing the goal line.

On the day, Timmons finished with eight tackles (five solo), half a sack, one pass deflection and one quarterback hit to go along with his leaping interception.

Along with Timmons, Ryan Shazier and James Harrison came up big as the ageless wonder led the Steelers with nine tackles (four solo) and a tackle for loss on the day. Shazier finished with just five tackles, but two of those were big tackles for loss.

Bud Dupree continues to get all of the work at outside linebacker opposite of Harrison, finishing with just three tackles (two solo) and one tackle for loss one week after registering three sacks.

Without having to worry about AJ Green, the Pittsburgh secondary really put the clamps on the Cincinnati passing game, holding Andy Dalton to just 157 yards (5.8 yards per attempt) in the win.

Artie Burns gave up some catches early to Brandon LaFell, but on each catch Burns was right on LaFell’s hip, showcasing his ability to stick to receivers in man coverage.

Along with Burns, Ross Cockrell continues to provide a steady presence on the opposite side of the field, batting down a pass in the fourth quarter to end a Cincinnati drive while also finishing with three tackles.

Sean Davis has now played 299 straight snaps since being inserted into the starting lineup and really appears to be a homerun pick by the Steelers. Davis lived around the line of scrimmage on Sunday, finishing with six tackles (four solo) and half a sack on the day.

Opposite of Davis, Mike Mitchell a strong day despite flying under the radar, finishing with six tackles (four solo).

Chris “The Boz” Boswell for MVP!

All jokes aside, we’re probably sitting here today talking about a loss if Boswell doesn’t nail six field goals on the day, including three for 49 yards against the Bengals while still recovering from an abdomen injury.

As Boswell stole the show in the kicking game, Jordan Berry was called on just once on the day, racking up 40 yards on his lone punt to down the Bengals inside their own 20-yard line.

In the return game, Coates flashed some explosive returning ability, taking back a kick 44 yards to set the Steelers up near midfield in the first quarter. Fitzgerald Toussaint really struggled as a returner though, finishing with a return average of just 16 yards on the day.

In kick coverage the Steelers were really bad at filling lanes, allowing undrafted rookie Alex Erickson to bring a kick back 72 yards before Boswell was able to make a touchdown-saving tackle by Erickson’s shoestrings.

With it being so late in the season the Steelers can’t afford to have mental lapses on special teams, allowing teams to get explosive plays in that department.