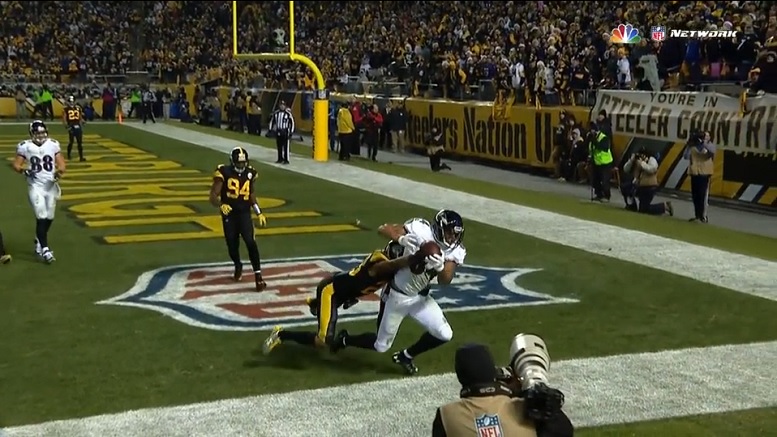 The Pittsburgh Steelers defense certainly had their share of problems in Sunday’s win over the Baltimore Ravens and as we’ve seen several times throughout the season, poor tackling led their list of gaffes.

Those tacking problems aside, the Steelers defense still managed to make a few plays throughout the game and a few of them came in the end zone. The two big ones that first come to mind were plays made by the Steelers starting safeties, Mike Mitchell and Sean Davis.

With 6:05 left in the first quarter, the Ravens faced a 2nd and 11 from the Steelers 23-yard-line and Baltimore quarterback Joe Flacco attempted to go deep to wide receiver Breshad Perriman, who ran a corner route out of the slot against the Steelers cover-3 defense. Defensively for the Steelers, cornerback Artie Burns was late recognizing the out-breaking Perriman entering his third of the field as he seemed to be preoccupied with the short in-breaking route that was already covered by fellow cornerback William Gay as part of the underneath zone. With Burns slow to recognize Perriman, Mitchell then had to hurry to get over the top to prevent the Ravens wide receiver from making the catch.

While Perriman would have had to make a tough catch even if Mitchell doesn’t get to him in time, the Steelers safety makes sure that he has no chance to come down with the football. The pass breakup resulted in a third and long for the Ravens offense and after they failed to convert it, they were forced to settle for a field goal.

With 14:27 left in the fourth quarter, it was Davis’ turn to save a touchdown.

On 3rd and 3 from the Steelers 4-yard-line, the Ravens ran a snag concept (corner, snag, flat) to the right wider side of the field. We’ve see the Steelers offense run this concept quite frequently over the years so the Steelers defense should have been quite familiar with the route combinations.

On the play, it looks like the Steelers are in cover-6 with Davis serving as the deep safety on the half portion. As the play progresses, Ravens tight end Darren Waller runs the corner route of the snag concept which results in him running away from Davis. While Flacco makes a solid throw to Waller, who catches the football with two hands while getting both of his feet in bounds, the trailing Davis is able to get his right hand inside to knock the football of the hands of the tight end as he’s going out of bounds.

Davis’ pass breakup forced the Ravens the settle for another field goal to make it a 20-10 game. The Steelers offense then responded with their first of three fourth quarter touchdowns.

In summation, Mitchell and Davis combined to save 8 total points.