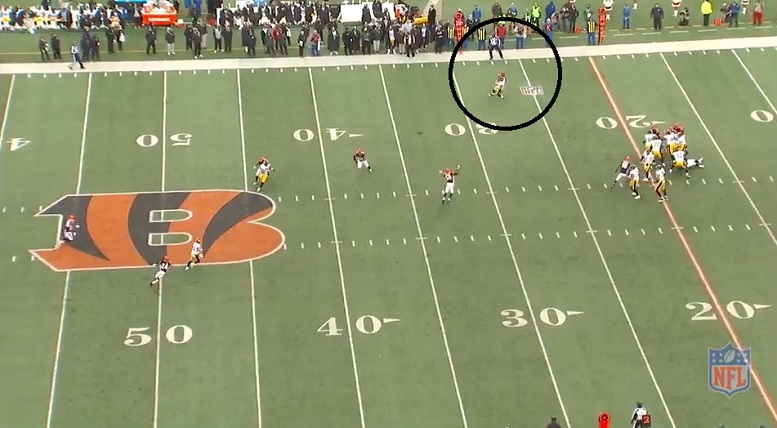 If you listened to Pittsburgh Steelers quarterback Ben Roethlisberger Tuesday morning on 93.7 The Fan, you already know that he’s still not a big fan of Cincinnati Bengals linebacker Vontaze Burfict. Not only was Roethlisberger not happy with Burfict roughing him in the third quarter of Sunday’s game, he also took issue with another hit by the Bengals linebacker in the second quarter as well.

“There was a play that people might not even know about,” Roethlisberger started. “We had a play-action pass, Rosie Nix runs to the flat, I step up in the pocket, the ball is out of my hands and I know this because I first saw it on the sideline on the pictures and then saw it on film, the ball is out of my hands down the middle of the field and Burfict hits Rosie. Like cleans his clock, knocks him to the ground on the sideline. Like, it’s not even close to the play, [he] should have been flagged 15 yards, [a] fine.”

Below is the all-22 view of the play Roethlisberger is talking about and as you can clearly see, the football was clearly long out of his hand when Burfict levels fullback Roosevelt Nix.

Now, Nix was within five yards of the original line of scrimmage so I suppose that might be an argument as to why Burfict wasn’t flagged by the side judge who had a perfect view of the hit. Even if that’s the case, Nix looks to be in a defenseless position. I could understand the hit if Nix was close to the flight-line of the football, but he wasn’t. If you remember, Steelers safety Mike Mitchell had a hit that fit that criteria a few weeks ago in the game against the New York Giants.

Roethlisberger is so upset about the hit on Nix by Burfict that it makes you wonder if the Steelers sent a copy of the play to the league to review.

We’ll likely find out in a few days whether or not Burfict will be fined for him roughing Roethlisberger. He should be. Additionally, it will be interesting if he’s fined for his hit on Nix as well. Roethlisberger clearly thinks that should be the case.