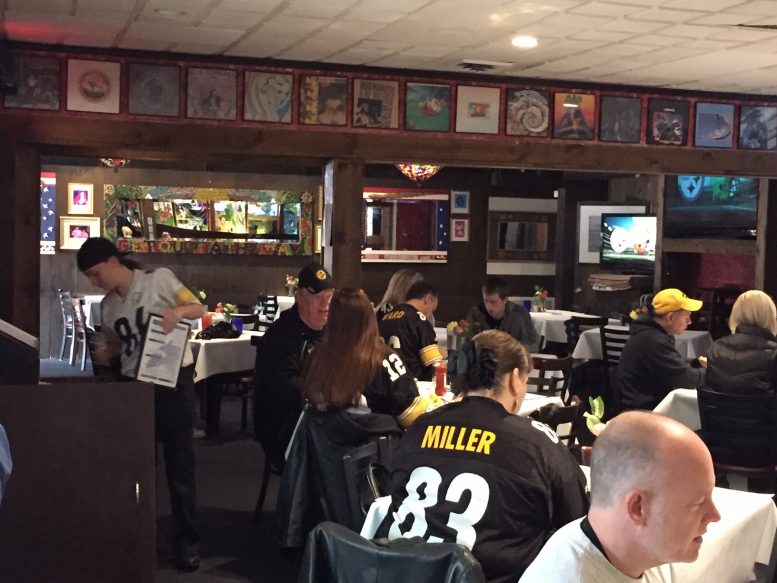 WATCHING STEELERS VERSUS BENGALS AT A STEELERS BAR

I try to enjoy as many Pittsburgh Steelers games as possible – that is when the team accommodates its fans with a winning performance. For Sunday’s game against the Cincinnati Bengals, I was ensconced at a small table in the Outta the Way Café in Derwood, Maryland; which becomes a Steeler Bar every gameday. Laptop out; earbuds in; phone on Steeler’s website; Terrible Towels positioned within ready reach.

Pregame broadcasts; tweets and blogs were a mixture of cautious optimism and downright doom. Much attention given to Ben Roethlisberger’s erratic performances at away games. Optimism that A.J. Green was doubtful and then confirmed out once the inactive lists were announced at 11:30AM. But pessimism that Tyler Eifert would more than compensate for his loss down the seam. Injury to Giovani Bernard had decapitated the Bengals two-headed running attack but Jeremy Hill would just have more opportunities to touch the ball. A debate on whether quarterback Andy Dalton should be preferred over Joe Flacco. Chatter about the new attitude of Vontaze Burfict who had not been penalized since stomping on LeGarrette Blount earlier in the season.

Anticipation of DeAngelo Williams giving Le’Veon Bell a spell for a few snaps … soon eliminated with the announcement that D-Will was inactive for the day – oh well. Le’Veon does not get tired – a GPS gadget attached to him at practices proves that some said. But would those nasty brutes in the Queen City hurt him as before others said. Even journalists talking about the Ravens game on Xmas Day – looking past this game anyone?

Although I was physically in Steelers bar with giant screens; much of my time was spent within the intimate cyber-confines of the Steelers Depot discussion threads. On the Bengals first possession; “Third down this could set the early tone” was clacked out on the thread. The bar erupted in cheers, it looked like William Gay had got in for an early sack. Then sighs as the dreaded “FLAG” went up on the screen. Replay showed Stephon Tuitt twisting around, reaching out to grasp the facemask as a blocker shoved him out of the way. Finally gasps and murmurs as Tuitt hobbled off not to return to the game. One play, went through a range of emotions, elation, deflation, resignation. How could the Steelers deal with the loss of Tuitt with Heyward already on IR?  Yes, that down set the early tone of the game.

Bend don’t break; disappointment that recent Steeler for a day Randy Bullock scored with a kick but at least it was for three and not capping off a touchdown after almost having a three and out. Sammie Coates brought some temporary cheer with a 44-yard return but after a couple successful passes; Le’Veon is shut down and the game is tied but the feeling is that the Bengals are on a roll. Another penalty this one on the end zone against Artie Burns reinforces that sinking feeling. Jeremy Hill is stuffed by Lawrence Timmons; then Daniel McCullers; then Timmons again; bend don’t break. A review upholds a brilliant stand made moot by a quarterback sneaking Andy Dalton … broke.

The Outta the Way Café was getting quiet. The Steelers Depot game thread, unrestrained & uninhibited by physical proximity was quite the opposite. Can’t win on the road. Fire Haley. Fire Fouts. Fire everybody. Tomlin take your sunglasses off, the sun ain’t shining in Steelers land. Can’t beat the referees; can’t win on the road; can’t defeat the easy teams. Other voices; they can do this; it’s just the first half; need a Penn State like second half. I don’t think the momentum shifted on a single play but perhaps a series of events.

The first came with 9:06 left in the first half. The Bengals offense had sliced through the Tuitt-less Steelers defense like butter. Jeremy Hill ran off the right guard for a 4-yard touchdown. To take a 17-3 lead. Multiple people were saying that the game was over. This was perhaps the low point of the game. One person asked, “Where are the ‘calm down’ and ‘relax guys at…” and the responses varied from; “still here. still over 40 mins to go” to “I can’t enjoy the Steelers playing so terribly vs the Bengals and never will!”

But then it happened. “whoa … he tore up the towel …” and then “Hey maybe the Terrible Towel curse will come in to play.” Jeremy Hill picked up a Terrible Towel that had been tossed from the stands – choreographed? – what Steelers fan would toss their towel away? Hill failed in his attempt to rip the Towel but then threw it on the ground to desecrate it. I just hope someone had the presence of mind to retrieve that towel.

The Steelers got another field goal. Then a second momentum impacting event occurred. Another short kickoff and the Bengals speedy Alex Erickson is racing down the sideline with just the kicker to beat. Chris Boswell was just able to grab his foot causing him to trip up and the defense aided by a pass defensed by Artie Burns held them to a field goal. Instead of being down 6-24; it was 6-20.

With 2:46 left in the half, Ben got the ball back and drove the team down the field for another Boswell field goal. A lot of moans about no touchdown especially since an end zone catch by Antonio Brown had been nullified by Le’Veon Bell’s chop block on the previous drive. Yet, three points were three points and the Steelers were due to get the ball to open the second half.

“It’s not about their offense, it’s about penalties … we gotta play cleaner.” Mike Tomlin just before going into the locker room at halftime.

The second half started out very physically. To everyone’s amazement Marcus Gilbert was called for unnecessary roughness when it looked like Burfict and David DeCastro were going at each other on the second play of the half. What happened to Tomlin’s words? Didn’t he convey that message to the team in the locker room? Not to worry; it does appear that the Steelers got focused while the Bengals steadily unraveled like a ball of string. That play was another event that seemed to settle the team. A few minutes later the same drive Burfict threw Ben to the ground drawing attention and a flag to himself. What went unnoticed by the referees was his helmet to helmet tap on Ben. Ben responded with a smile and a look like really?

Ryan Shazier’s sack ended a Bengals drive and the Steelers responded with yet another field goal ending drive.  Chipping away at the Bengals lead while shutting down the Bengals offense. Another big play as Lawrence Timmons makes his interception with 10 seconds left in the third quarter. The touchdown pass to Eli Rogers felt anticlimactic as the Bengals self-inflicted penalties made this score seem inevitable. Right as rain; the Bengals imploding while the Steelers held it together with a firm resolve. Perhaps assisted by yet another player & team running afoul of the power of the Terrible Towel.

On to Pittsburgh to take on the Baltimore Ravens. I will be at Heinz Field for that one.