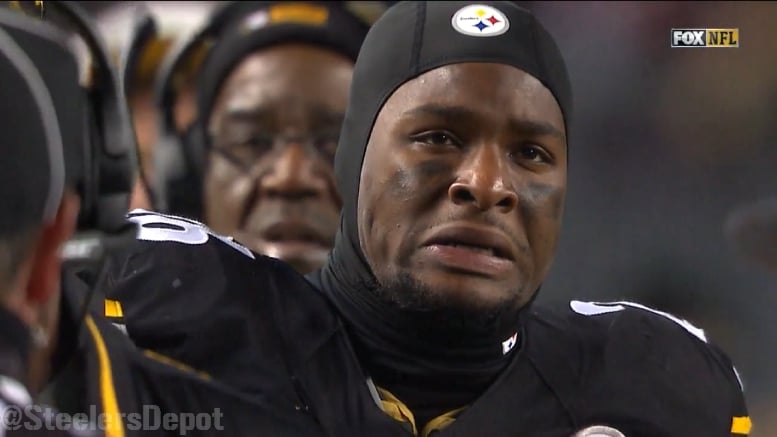 There are a few subjects that some readers have expressed fatigue in reading about consistently. The one most often cited has been the chronicling of the disappearing act of wide receiver Sammie Coates for the Pittsburgh Steelers offense (I assure you, an article on this topic will be coming in the near future).

One topic that I am getting really tired of writing about this season is fourth-year running back Le’Veon Bell fumbling the football. It is a topic that I only had to write about one time as a current event over the course of his first three NFL seasons. He had just one fumble in the first 918 touches of his career.

But after his fumble in yesterday’s game, his season total stands at four. And more and more people are starting to pay attention, because this is the first fumble of the regular season that he actually lost.

The fumble came in the third quarter. The Steelers had just gotten a defensive stop and were working to get off of their own goal line. After getting a first down at the 15, Bell carried up the middle for three yards before being stripped of the ball.

The fumble was recovered by Giants first-round rookie cornerback Eli Apple—who also had New York’s other turnover, an interception—at Pittsburgh’s 17-yard line. The Giants offense made quick work of turning the takeaway into points, getting into the end zone in two plays, at the time making it a 14-7 game.

It was fortunate that the Steelers were able to respond so robustly and so immediately on the following drive to limit the damage that the fumble caused, because the game could have quickly taken on a different complexion had their first possession after giving up points off of a turnover not gone well. For his part, Bell contributed 22 yards on four carries on the scoring drive.

On the season, Bell now has 180 carries to go along with 63 receptions, giving him 243 total touches during the nine games in which he has played. With four fumbles on the year, he is averaging a fumble on every 61 touches, which works out to roughly once every other game or so, statistically.

It is at this point that I would like to remind you that Bell also had a fumble during his lone appearance in the preseason, meaning that he has fumbled five times in a game-like context since he has returned from his latest injury. He is without a doubt an excellent player, but the fumbling problem is quickly becoming a concern.

I have had some readers respond to me via Twitter telling me that it’s not that big of a deal because he has only lost one of them, and a couple of them have gone out of bounds. To that I say, every fumble matters, and when you have four in a six-game span, there is a real problem.

Oh, and one of those sideline fumbles that nearly went out of bounds? The one against Dallas would have been a turnover had Marcus Gilbert not made an excellent play to knock the ball out of the Cowboys safety’s grasp. It shouldn’t take a loss of possession to make this a point of discussion.