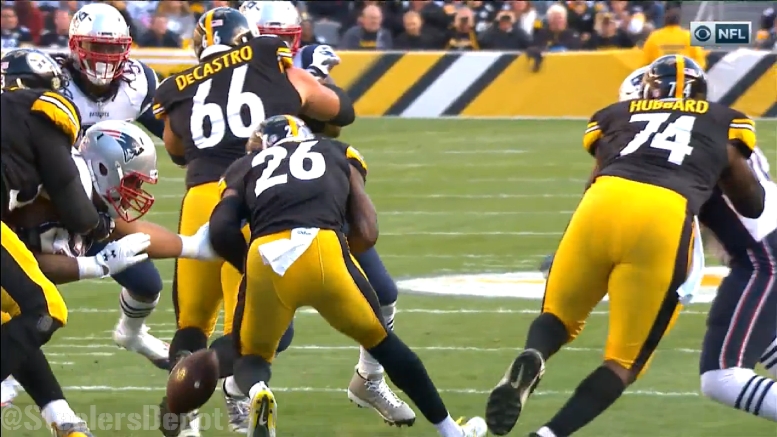 Pittsburgh Steelers running back Le’Veon Bell has carried the ball 730 times in his four-year career. He has also caught 188 passes over the course of those four seasons, giving him 918 touches. That is 918 opportunities for him to lose the ball. To fumble the ball. in 918 touches in his career, he has fumbled twice, and lost it once.

To put some numbers to it, that is one fumble for every 459 touches, and one lost ball for every 918 touches. If he goes another few games without losing a fumble, he will have gone 1000 touches while having lost possession for his team in just one occasion, which would be pretty remarkable.

In fact, on Sunday, he even managed to pick up a fumble following a bobbled snap by quarterback Ben Roethlisberger, which he turned into a four-yard gain—which, frankly, was one of the Steelers’ more successful running plays on Sunday.

Bell’s first fumble came in the penultimate game of his rookie season, on the 253rd carry of the season. He had 36 more touches that year, and then failed to fumble for the next two seasons in 510 combined touches in 2014 and 2015.

He managed to go 68 touches into the 2016 season before fumbling on his first touch of his fourth game, which means that, in total, he went 614 touches without putting the ball on the ground for a fumble a single time.

I’m not entirely sure where that ranks him on the all-time lists for consecutive touches without a fumble, but I’m guessing that it ranks him pretty high. According to the Wikipedia entry for fumbles, three names are given for records for the highest number of consecutive touches without a fumble, with former Rams, Falcons, and Patriots running back Steven Jackson finishing his career without a fumble in his last four years on 870 touches. He fumbled once every 140 touches in his career.

But he did fumble the ball 23 times over the course of his first eight seasons, so there is that. Then there is LaDainian Tomlinson, who had a span of game from 2006 to 2008 during which he went 712 touches without a fumble. He fumbled 30 times on 3798 touches, or once every 127 touches.

Then there was Barry Sanders, who according to an article did not fumble did not fumble in 803 touches from 1992 to 1995, but when you look at his career stats, it becomes clear that what is meant is that he did not lose a fumble. He fumbled twice in 1993. Sanders had 27 fumbles in his career on 3414 touches, averaging a fumble once every 126 touches*.

Those are all pretty remarkable ratios. And it is one that should serve as a benchmark to appreciate the start of Le’Veon Bell’s career, who has two fumbles in 918 touches, or once every 459 touches. Of course, if he fumbled on his next two touches, his rate would drop down to once every 230 touches. His pace is a remarkable one, and likely unsustainable, but for now, it deserves to be noted and appreciated.

*According to Pro Football Reference—fumble numbers don’t appear to have been kept by the NFL prior to 1991—Sanders actually had 41 fumbles, including 10 in his rookie season in 1989, so his fumble rate is actually once every 83 touches. Not so great after all.