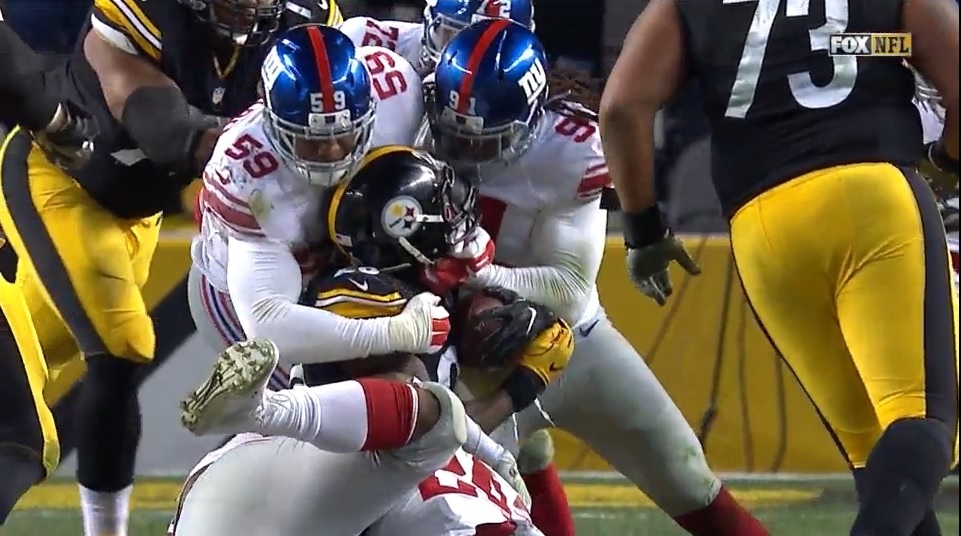 Pull away the player who tried to corkscrew the neck of your running back? Fine.

Be the guy who tried to corkscrew a guy’s neck? No fine.

That’s what the NFL has said after officially announcing the fines from this past weekend’s slate of games.

As was reported yesterday, Ramon Foster was slapped with a $9,115 fine for his actions against Kelvin Sheppard in the waning moments of Sunday’s 24-14 win over the New York Giants. Spotrac.com has it listed for a “fighting” infraction, presumably, for the kneeling motion Foster had into Sheppard after pulling him off the pile.

But Sheppard himself? Nada.

Giants LB Kelvin Sheppard wasn't fined for what he was doing to Le'Veon Bell that got retaliation from Ramon Foster, who was docked $9,115

A reminder if you haven’t seen the play yet or what Sheppard did.

According to the league, this is kosher.

I have no issue with Foster’s wallet getting lighter. He made the right decision, sticking up for his guy, but it’s difficult to wrap my mind around one player getting a fine for an arguably less egregious act. And it continues to be hard to predict what actions will incur a fine and which will be glossed over.

If there is any, I guess good news, is Giants’ safety Eric Pinkins has hit with a hefty fine after his blindside block on Shamarko Thomas, knocking Thomas out of the game with a concussion. If you go back, it really was a nasty hit. There was no flag on the play, however.

Also, Giants S Eric Pinkins was fined $24,309 for a blindside block on a kickoff at the end of the first half.