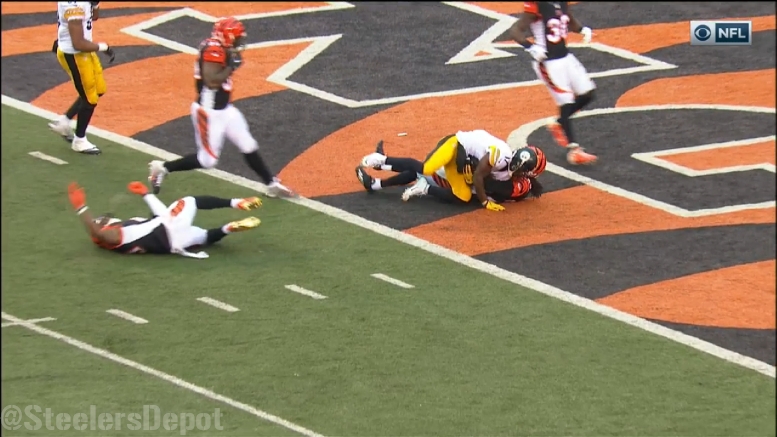 Although it was not necessarily a banner day for the offense, the Pittsburgh Steelers did get some big-time contributions from some of their less unheralded players, and that includes second-year slot receiver Eli Rogers, who had arguably the best, or at least the biggest, game of his young career in helping the team take down the Cincinnati Bengals on the road.

Rogers, who is essentially in his first season after spending all of his rookie year on injured reserve, today played in his 11th game, officially, though technically his 10th, since he was benched for disciplinary reasons for one of those games. He also missed two games due to an ankle injury earlier in the year.

But he just posted his most complete stat line of his career, even if he didn’t put up any new career-bests. His five receptions against the Bengals is only his third-most of the season after catching six in the opener and against the Ravens.

Some of those catches were critical as well, and it is worth noting that his day began with his lone incompletion on third and five when Bengals linebacker Vontaze Burfict popped him while trying to reel in a difficult pass, preventing him from holding on to the ball.

After that, he went five-for-five, even if his first reception proved to be a screen pass for a loss of three yards on a third-and-22 play. Midway through the third quarter, he connected with Ben Roethlisberger on a deep target for 28 yards that helped flip the field and led to one of the Steelers’ six field goals on the day.

His 17-yard reception early in the fourth quarter on a first and 20 play after a penalty also helped salvage the drive and secure their sixth and final field goal, but it was his fourth reception that was his biggest, and most important—perhaps the defining moment up to this point of his young career.

Facing a second and 16 from the 24-yard line, Rogers came out of the right slot and beat slot cornerback Josh Shaw down the field, faking him out with a false step outside before working back to the post to gain separation. He stopped to bring in the ball at the one and backed his way into the end zone for the score.

The adjustment that he made to the ball should also be noted, as it was a fine display. He wrapped up his day with a nine-yard reception on a quick slant on the Steelers’ final 5:53-minute drive to close out the game.