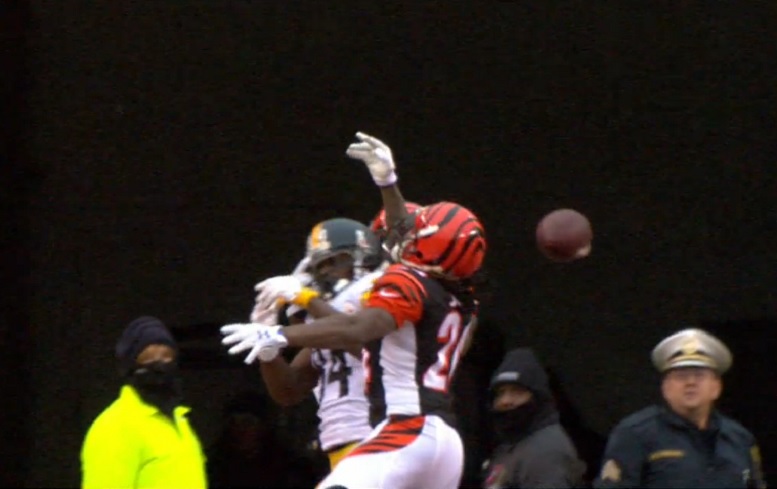 While the Pittsburgh Steelers were able to overcome several big first half penalties in their Sunday win over the Cincinnati Bengals, they certainly didn’t get any help from the officiating crew throughout the AFC North contest. In fact, the officiating appeared to very one-sided for most of the game.

While I can probably highlight at least half a dozen missed or bad calls by Sundays officiating crew, I’ll stick with four that really had the fan base of the Steelers up in arms during the game.

With 10:49 left in the third quarter, the Steelers faced a 3rd and 11 from the Bengals 22-yard-line. Quarterback Ben Roethlisberger threw deep to wide receiver Antonio Brown in the end zone and while double-covered, Bengals safety Shawn Williams went over the back of Brown and pulled him down by his facemask. No call was made, however, and the Steelers had to settle for a field goal.

That wasn’t the only missed facemask on a Steelers wide receiver, however.

With 4:16 left in the third quarter the Steelers offense faced a 2nd and 5 play from the Bengals 35-yard-line and this time Roethlisberger threw deep to wide receiver Sammie Coates deep down the middle of the field. This time, Bengals cornerback Dre Kirkpatrick went over the back of Coates in the end zone to break up the pass and in doing so his right hand grabbed ahold of the wide receiver’s facemask. Once again, no call was made.

One other non-call really caught my eye and it came during the play that Steelers linebacker Lawrence Timmons intercepted Bengals quarterback Andy Dalton. As you can see below, Bengals center Russell Bodine was five yards past the line of scrimmage when Dalton delivered the football. Sure, the penalty would’ve been declined by the Steelers, but it was a blatant miss by the officials nonetheless.

On top of that, Timmons was clotheslined by Bengals tackle Andrew Whitworth during the return. Rule 12, Section 2, Article 12(c) states: “All players are prohibited from striking, swinging at or clubbing the head, neck or face of an opponent with the wrist(s), arm(s), elbow(s) or hand(s).”

Ok, what else would you like to see that was missed?