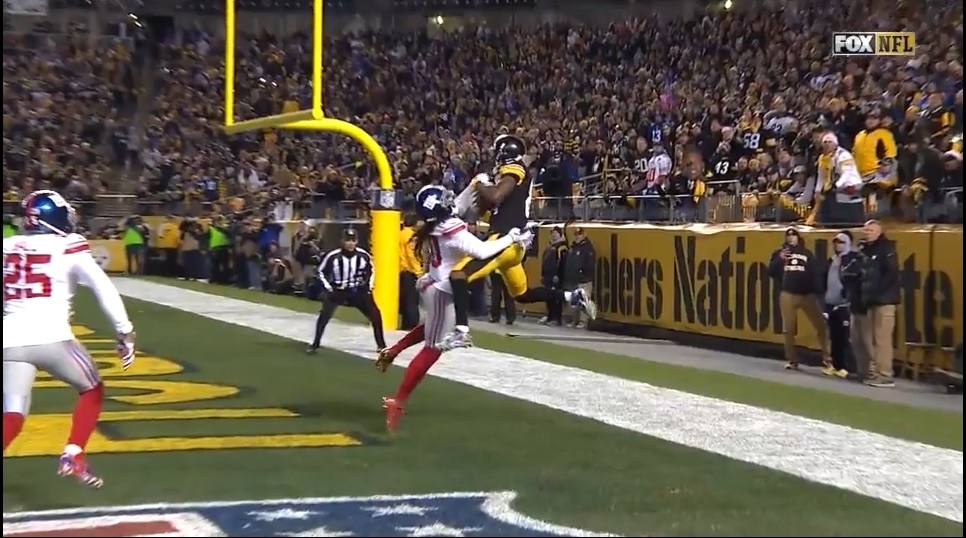 Pittsburgh Steelers wide receiver Antonio Brown may not have had the flashiest day of his career, what with a ‘mere’ six receptions for 54 yards and a touchdown, but that touchdown was pretty important, not just for the game, but also for the franchise record books.

As I wrote about yesterday, Brown and quarterback Ben Roethlisberger entered Sunday’s game having connected on 48 touchdown passes over the course of Brown’s seven-year career. That put them just one connection behind the duo of Hall of Famers Terry Bradshaw and Lynn Swann for the most by a pair in Steelers history, having done so 49 times between 1974 and 1981.

Brown’s touchdown reception yesterday against the Giants—which was an impressive one all on its own—put himself and Roethlisberger in a tie with Bradshaw and Swann, and the next touchdown reception will give them the nice, round number of 50 together at a duo, a feat that no two other players wearing Steelers uniforms can ever claim to have accomplished before.

It is striking to note that so many of those connections have come over just the course of the past three seasons, and there are still  four games left to play in 2016. His touchdown yesterday gave Brown 11 on the season, which is more than any other player in the league. Only two other players even have 10 touchdown receptions yet.

Brown’s current scoring production, however, is unprecedented in Steelers history. He now has 34 receiving touchdowns in the past three season, and there is still a quarter left to play this year. No Steeler has ever had three consecutive double-digit receiving touchdown seasons before now, and only one had ever done that over the course of a career.

Considering that he had just two touchdown receptions in his first two seasons, and seven in his first three, it is pretty remarkable what he has managed to do since he has taken over the role as the Steelers’ primary passing target.

We don’t even have to qualify his 2016 numbers by pointing out that there are still four games to go to be impressed. He has caught 88 passes for 1052 yards and 11 touchdowns. That is a really solid season in and of itself, with impressive scoring output.

Over the course of the past four seasons, he has averaged 116 receptions for 1594 yards and 10.5 touchdowns. And he has four games to improve that average even more, or roughly the output of one entire game, so he could end up averaging something like 123 receptions for 1675 yards and 11 touchdowns over a four-year span. Which is insane.