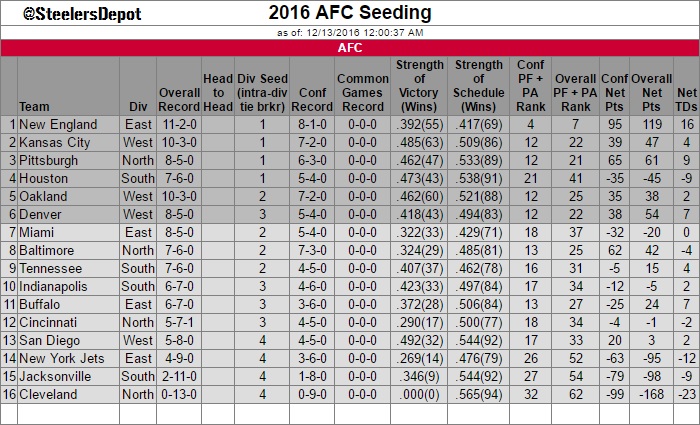 The AFC North will have a new leader in Week 15 and it will be the Pittsburgh Steelers.

The Steelers, who beat the Buffalo Bills 27-20 Sunday afternoon, now have a one game lead over the Baltimore Ravens thanks to their 30-23 loss Monday night to the New England Patriots to close out Week 14 of the 2016 regular season.

In the Ravens loss to the Patriots, Baltimore quarterback Joe Flacco completed 37 of his 52 total pass attempts for 324 yards with two touchdowns and one interception. Both of Flacco’s scoring throws came late in the third quarter and on short fields thanks to the Patriots turning the football over on special teams.

While the Ravens defense has played well this season, they were no match Monday night for Patriots quarterback Tom Brady, who completed 25 of his 38 total pass attempts in the game for 406 yards with three touchdowns and one interception. One of those passing touchdowns went to wide receiver Chris Hogan from 79-yards out with 6:18 left in the fourth quarter. Hogan, who finished the game with five receptions for 129 yards, got behind the Ravens defense for his score.

The Patriots also rushed for 95 yards against the Ravens and running back LeGarrette Blount led New England with 72 yards on 18 carries. He also scored once late in the first quarter.

The 7-6 Ravens will now prepare to host the Philadelphia Eagles next Sunday. The following week they will play the Steelers in Pittsburgh on Christmas day.

As for the Cincinnati Bengals, they beat the Cleveland Browns 23-10 on the road on Sunday. They’ll now enter Week 15 with a 5-7-1 record thanks to that win.

Bengals quarterback Andy Dalton completed 20 of his 28 total pass attempts for 180 yards and two touchdowns in his team’s win over the Browns. Both of his scoring throws went to tight end Tyler Eifert, who finished the game with five receptions for 48 yards. Bengals running back Jeremy Hill added 111 yards and a score on the ground in his team’s win over Cleveland.

The Bengals will host the Steelers next Sunday while the winless Browns will play the Bills on the road in Week 15.

As far as seeding in the AFC goes, the Steelers will enter Week 15 as the No. 3 seed now that they have taken over the lead in the AFC North. As for the Ravens, they’re now the No. 8 seed in the AFC.