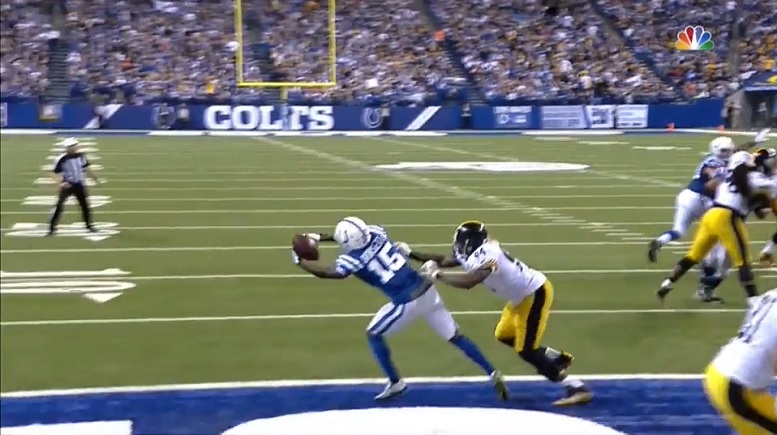 The Pittsburgh Steelers Thursday night win over the Indianapolis Colts certainly wasn’t a perfect one by any stretch of the imagination and if you saw the game you know exactly what I mean by that.

While the Steelers defense managed to limit the Colts offense to just 7 points in the win, the Indianapolis offense failed to capitalize on several coverage mistakes during the game that undoubtedly would have made the game a lot closer on the scoreboard.

Case in point. On a 1st and 10 play with 5:55 left in the first half, Colts wide receiver T.Y. Hilton dropped a deep pass from quarterback Scott Tolzien down the right side of the field. On that play, Hilton ran right past Steelers cornerback Ross Cockrell and he likely would’ve scored easily had he caught the football. It was most certainly a blown coverage by the Steelers secondary.

Additionally, with 13:31 left in the third quarter, Tolzien failed to connect with wide receiver Phillip Dorsett in the end zone on a 4th and goal play from the Steelers 1-yard-line. While Tolzien’s throw was a bit outside to Dorsett, the wide receiver still should have caught the football for a score as he was able to get both hands on the pass. On that play, Dorsett had motioned inside prior to the snap and ran a pivot route with linebacker Lawrence Timmons in coverage.

Even though the outcome of the both of those plays went in favor of the Steelers, head coach Mike Tomlin was asked Tuesday during his weekly press conference how he goes about dealing with such defensive gaffes after the fact.

“It’s great to be fortunate and you can’t anticipate being fortunate a lot at this level and that’s simply how you approach it,” Tomlin said. “Plays are going to be made, plays are going to be missed. I felt like we were behind them some. I thought we had an opportunity at some splash plays, particularly with Sammie Coates that we weren’t able to capitalize on. So, such is life in the National Football League.

With so many young players on the defensive side of the football for the Steelers, we’re bound to see a few more missed assignments and blown coverages in the team’s final five regular season games. Luckily for that unit, the Colts offense wasn’t able to capitalize on those mistakes Thursday night and hopefully Tomlin can indeed take advantage of his coaching and teaching  opportunities so that at the very least, the same mistakes aren’t duplicated.