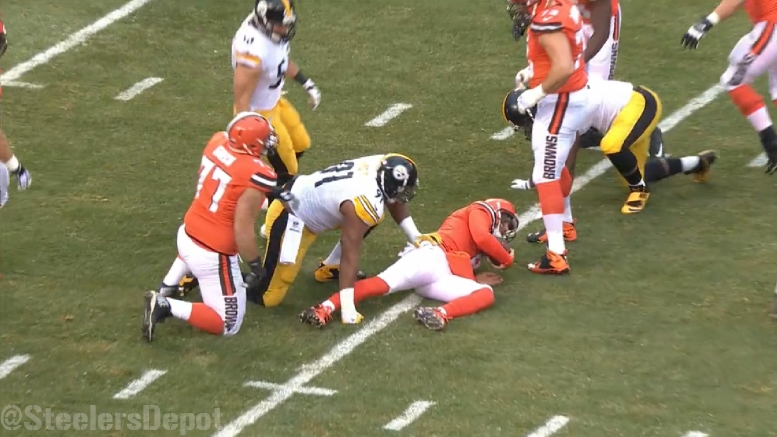 Remember when the Pittsburgh Steelers had trouble getting after the quarterback? In the post-win glow of a 24-9 Steelers victory in which they brought down more than one quarterback for a total of eight sacks, knocking one of them out of the game, it’s almost hard to remember how much the team has struggled to get not just sacks, but pressure for most of the season.

But Keith Butler’s unit has significantly ramped up the blitzing since the bye week, and that has turned into a higher success rate of getting after the quarterback. A shaky Browns offensive line that lost two starters in free agency was the victim of the day as the Steelers tied a league-high with eight sacks, the most they or anybody else has had this year.

Six different defenders joined the sack spree, with the most significant being the one that came courtesy of the 38-year-old James Harrison. That is because the full sack gave Harrison 77.5 in his career with Pittsburgh, which now puts him on top of the franchise sack list, the most anybody has ever gotten in a Steelers uniform.

The most impactful sack of the day, however, was a critical one, and it came courtesy of inside linebacker Ryan Shazier, who chased down Josh McCown, who was chased into the end zone on a cat blitz. The quarterback leaked out of the end zone and looked to throw, but Shazier used his closing speed to club the ball out.

The loose ball subsequently rolled backward and was recovered by rookie defensive tackle Javon Hargrave in the end zone. It was the team’s first defensive touchdown of the season, and more importantly, it opened up the game after the Browns had gotten to within eight points. That made it a 24-9 game, a margin that held to the final whistle.

Speaking of Hargrave, he also notched the first sack of his career, and Lawrence Timmons added his first full sack of the season. But the stars of the show were Stephon Tuitt and Arthur Moats, who combined for four sacks. Tuitt got two on his own and split one with Moats, who also had a solo sack.

It is a happy coincidence that the Steelers find their most productive game in the pass rush in their first game after placing their sack leader, Cameron Heyward, on injured reserve. But with his two and a half sacks on the day, Tuitt now leads the team, while Harrison and Moats both tied Heyward’s three sacks.

While it’s true that the Steelers got the opportunity to go up against what can only be best described as a less than stellar offensive line, the production still bodes well for the future, and success often breeds success. Sacks and turnovers have a tendency to come in bunches. Especially when you suddenly decide to blitz about three times as frequently.