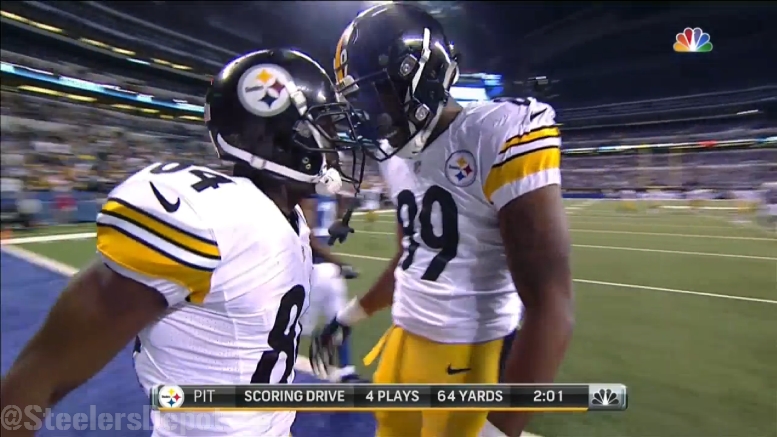 You may have noticed that since the hand injury suffered by Sammie Coates, the Pittsburgh Steelers have struggled significantly to generate production with the long ball. While they have still found moderate success gaining explosive plays, longer passes had largely eluded them. In fact, since Coates’ injury, the Steelers have thrown just two passes that have gone for 40 or more yards, and it would probably not surprise you to learn that Antonio Brown was on the receiving end of both of them.

If you use even 30 yards as a barometer, then from Week Six up until Thursday, in five games, the Steelers went from 10 such plays in the first five games to only four over the course of the next five. And one of them was exactly 30 yards.

Two of them came against the Cowboys, two games ago, with Brown adding a 44-yard reception and Cobi Hamilton catching a pass for 39 yards. On Sunday, the offense went blank in that category once against. But against the Colts on Thanksgiving, they tied a season high with four passes that went for at least 30 yards, having also previously done that against the Chiefs—from four different wide receivers.

On Thursday, however, it was only three different receivers, as two of them came from tight end Ladarius Green, who brought in his fourth and fifth passes of the season for 32 and 35 yards, respectively. Green’s second catch was only the fourth reception of 35 yards or more since Coates’ injury.

Also getting in on the action were Brown and Eli Rogers, the latter adding another 30-yarder right on the dot, and Brown catching a 33-yarder for a touchdown. It was just the second time of the season, the Chiefs game being the other, in which they had more than two passing plays of 30 or more yards. And two of them came on third and long.

On the season, the Steelers have 18 passing plays of 30 yards or more. Coates had six of them over the course of the first five games—and he has one reception for four yards since then. Brown and Rogers, respectively, have four and three of them, and Green added two to the mix for himself.

Other than Hamilton, both Markus Wheaton and Darrius Heyward-Bey have caught one pass each of 30 or 31 yards, and both of those passes when for touchdowns.

Of course, you should keep in mind that not every passing play that goes for 30 yards was the product of a deep target, although in this case, the vast majority of them were, with the exception perhaps of a couple of Rogers’ receptions that included a healthy dose of yards after the catch.

No matter how the big plays come, however, the Steelers have been lacking them, so Thursday’s production on that front was a key sign, perhaps, of the offense regaining a much-needed explosive component that has been missing for a large stretch of the year.