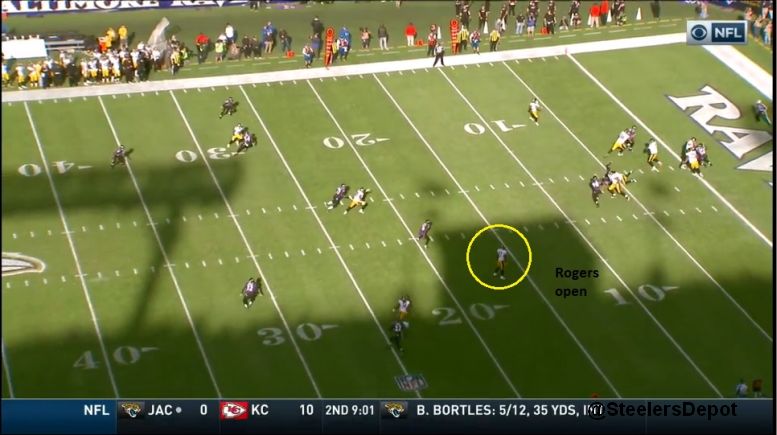 We’ve seen some clunkers from Ben Roethlisberger. But yesterday was as bad as it’s been with #7. The final box score might look decent if you’re in a giving mood but as our Matthew Marczi wrote yesterday, anyone who even had the game on as background noise knows how bad he was.

This post could be littered with clips of the failures of Roethlisberger and by extension, the Steelers’ offense, but we’ll focus on just a couple of plays. For your sake and mine.

This first one comes on third and ten at the Steelers own ten yardline late in the second quarter. I realize that too often, people point out quarterbacks missing open receivers and wonder why the ball didn’t go there. I generally stay away from that low-hanging fruit because it’s a lot harder to understand the nuance behind it; the thought process, the read, the progression. All quarterbacks miss open guys and hindsight is the best quarterback to ever play.

But what we get here is a half field read by Roethlisberger, so focused on a clearly-covered Antonio Brown, without any apparent desire to look elsewhere.

The Baltimore Ravens are in a quarters defense meaning there is no way the Steelers are completing anything deep. It’s a zone coverage but it’s effectively a triple team; the safety over the top, the cornerback carrying him, and the SAM linebacker widening and getting depth (3rd and 10, play sticks, force underneath throw). 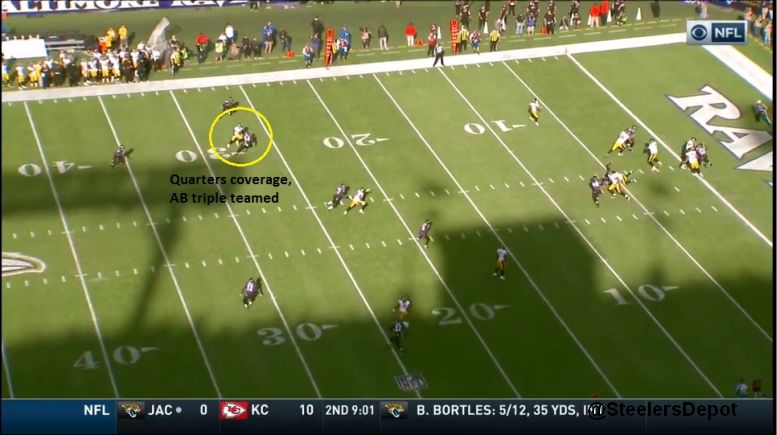 But Roethlisberger sticks to him, climbing the pocket, not getting off his read, and winds up harmlessly checking things down to Le’Veon Bell at the last moment. Bell makes a good effort but falls short of the marker, ultimately a gain of six.

Had Ben looked across the field to his left, he would’ve seen a wide open Eli Rogers, practically begging for the football. It’s a conversion and at the worst, helps flip the field and give the Ravens poorer field position if they got the ball back.

Instead, it’s a punt from their own 16. Jordan Berry bails them out with a 56 yard thump.

Here, it’s mid-third quarter. A dreadful game so far but still, only a ten point deficit. One drive and the feel has changed to we’re in this thing. But it ends with a Roethlisberger interception.

Roethlisberger does get off his first read here. I think Todd Haley was trying to influence the Ravens by showing/faking the smoke screen with Sammie Coates at the bottom and Antonio Brown running a slot fade. 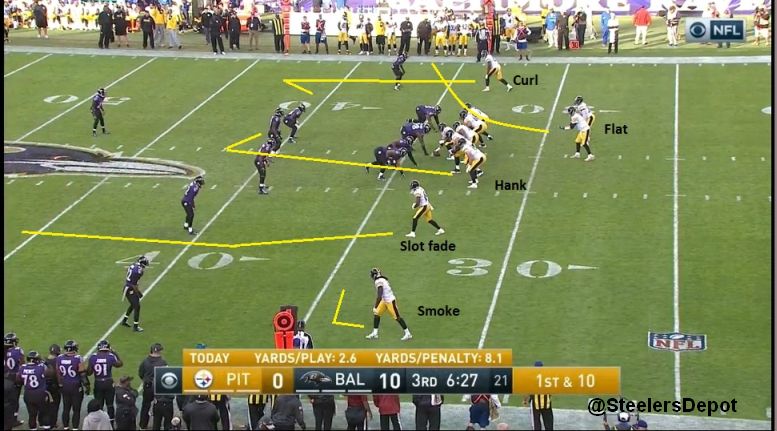 But he’s late in his second read, looking for Jesse James on a hank route over the middle. He double-clutches, probably debating if he should fire the ball with the linebacker behind, and it allows the Ravens’ defensive linemen to read his body language and know the ball is about to come out. You’ll see it best in the GIF at the end. 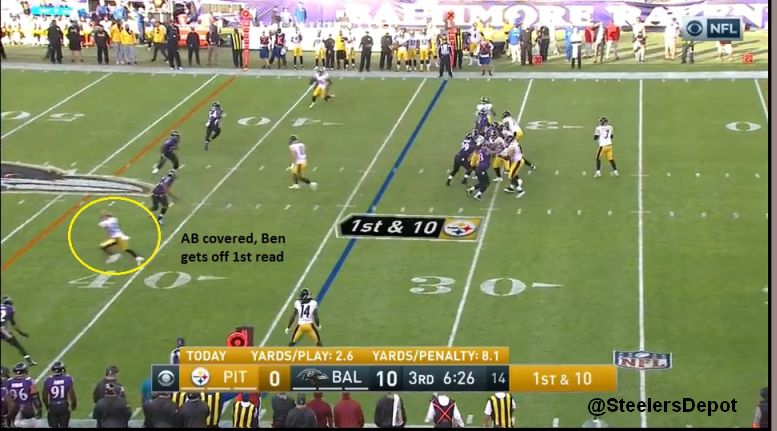 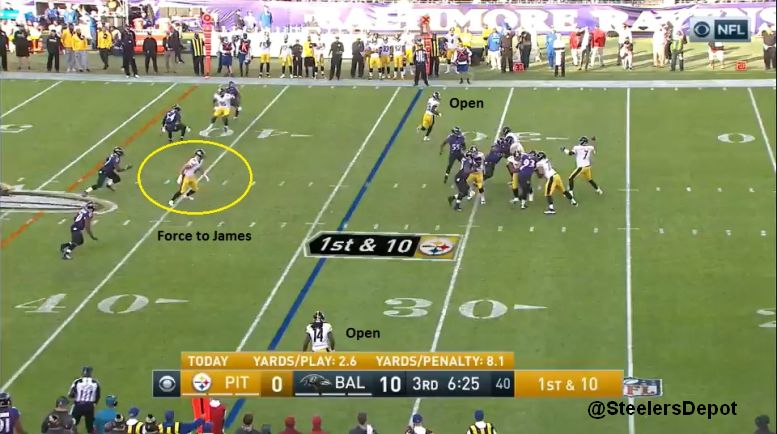 Brandon Williams tips it and Timmy Jernigan grabs it as the ball comes down. The Ravens wind up getting a field goal, going up 13-0, and keep the pressure on.

Our final look is the failed third down conversion before the Jordan Berry block, effectively putting this game out of reach. It’s 3rd and 8 and Pittsburgh runs a split-dig concept – one vertical route and one in-breaking route – one that is pretty similar to something this team ran against the New England Patriots. Let’s take a look at that one.

Solid throw by Landry Jones, on target, and a healthy gain of 25.

With Ben? It’s a total miss. Similar concept, similar coverage – perhaps Sammie Coates could’ve sold vertically better, hard to say – but the pass is several feet behind Brown. No chance for him to even make a play. Incomplete, and the Steelers  destroy my soul.

These are all relatively routine plays that most quarterbacks can make. Roethlisberger looked relatively healthy; he moved without a limp, extended plays, and nearly flipped Jerraud Powers. But he was certainly rusty, a product of getting limited reps in practice, and fell utterly flat in the loss.