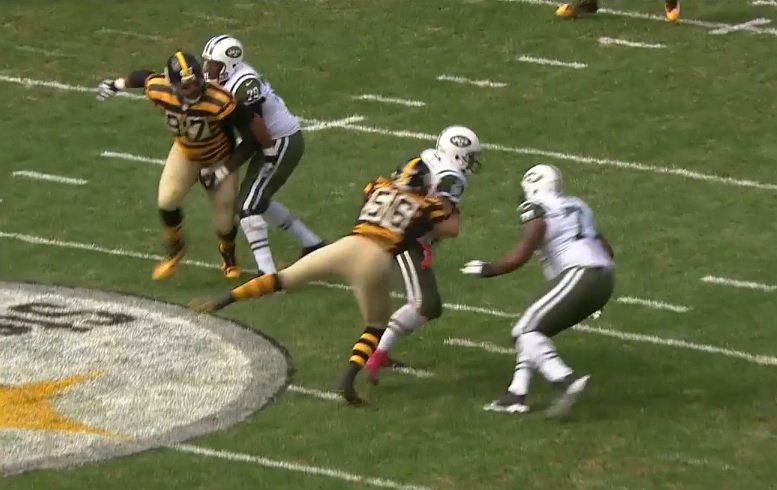 In the Pittsburgh Steelers 31-13 win over the New York Jets this past Sunday, the team’s defense recorded three sacks of which one belonged to second year outside linebacker Anthony Chickillo, the first of his career. While the Steelers outside linebackers played well as a whole against the Jets, head coach Mike Tomlin said Tuesday during his press conference that he hopes even better performances from that position group are forthcoming.

“I’d like to believe that our better days lie ahead,” Tomlin said of his outside linebackers. “We had good production but I still believe that our better days lie ahead. Like I mentioned after the game, I thought we had several instances where we could have finished some of our rushes and had a better sack total. That would have created a climate maybe where more turnovers would have occurred. We got a lot of work to do, we’re still very much a team in development in that area.”

As a team, the Steelers have managed to register just 8 sacks so far through their first five games of the season and defensive end Cameron Heyward is responsible for three of them and backup inside linebacker Vince Williams has two. Only 2.5 of the defenses’ sacks have come from outside linebackers as Chickillo and Arthur Moats are responsible for those.

Last season, the Steelers outside linebackers combined to have just 15 total sacks and several of those came late in games when the outcome was pretty much already decided. Currently, the Steelers outside linebackers are on pace to record only 8 sacks this season so it’s obvious why Tomlin hopes better days lie ahead when it comes to that position group potentially putting opposing quarterbacks on the ground in the coming weeks.

Due to him battling an ankle injury last week during practice, outside linebacker Jarvis Jones didn’t start against the Jets on the right side and he was replaced by veteran James Harrison. Tomlin explained that decision on Tuesday.

“James got the most of the preparation reps during the course of the week so we thought it was fitting that he start the game,” Tomlin said. “As the game unfolded, Jarvis proved to us that his health wasn’t an issue so as the game wore on he played more.”

While Sunday probably wasn’t Jones’ best regular season game of his career, it was one of his better ones and it included him registering 3 total tackles, 2 quarterback hits and a pass defensed in the 21 snaps that he played. On Tuesday, Tomlin was asked to comment on Jones’ play in that game.

“He was very disruptive versus the run and the pass, yes,” Tomlin said of Jones. “We were pleased with his performance.”

On Sunday, the Steelers will play the Miami Dolphins on the road and it could wind up being a great game for the team’s outside linebackers as their quarterback Ryan Tannehill has already been sacked 17 times so far this season. The Dolphins, however, might get starting left tackle Branden Albert back against the Steelers as he appears to over an illness that has kept him sidelined the last two games.