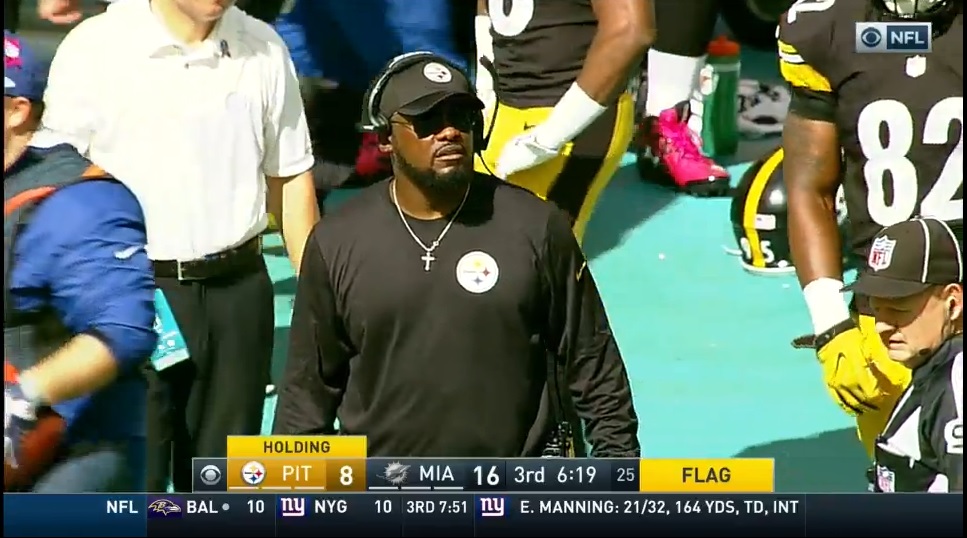 The only rhythm the Pittsburgh Steelers had Sunday afternoon was rhythm and blues.

And the only thing worse than that joke was their performance in the trenches in a 30-15 loss to the Miami Dolphins. A rushing attack besieged by penalties and forgotten about because of circumstances, a run defense that was as ugly as some younger fans have ever seen it.

Everyone in the locker room after that game knew it, too.

On the flip side, while the Steelers’ run game did have moderate success, penalties brought back too many promising runs and the deficit they were working against scrapped some of Le’Veon Bell’s involvement.

“Not possessing it enough,” David DeCastro told reporters in the locker room. “Not keeping those drives going. Not staying in a rhythm. Guys taking turns, myself included, getting penalties, little stupid stuff that sets us behind the chains. Just going to end drives.”

Jesse James, Alejandro Villanueva, and DeCastro were all penalized. Chris Hubbard and Xavier Grimble were flagged too but those were declined by Miami.

DeCastro’s penalty in particular was untimely. Instead of the Steelers having a 3rd and 2 at the Dolphins’ 45, it pushed them back to a 2nd and 19 at their own 38. Two plays later, Roethlisberger was intercepted and Miami would score on the ensuing drive. It pushed their lead to double-digits and in hindsight, ended the game.

Ramon Foster agreed with the assessment of the run game and offense as a whole.

“We set a high goal at the beginning of the season. We want to be a team that’s leading the league, or one of the top teams in the league, rushing. We just got to get opportunities and make sure we’re doing our job.”

The Steelers will need that running game when they take on the New England Patriots without Ben Roethlisberger Sunday afternoon.

On paper, that won’t be an easy task. New England entered the day as a top ten rush defense and the Cincinnati Bengals found little running room in their loss, averaging under four yards per carry.