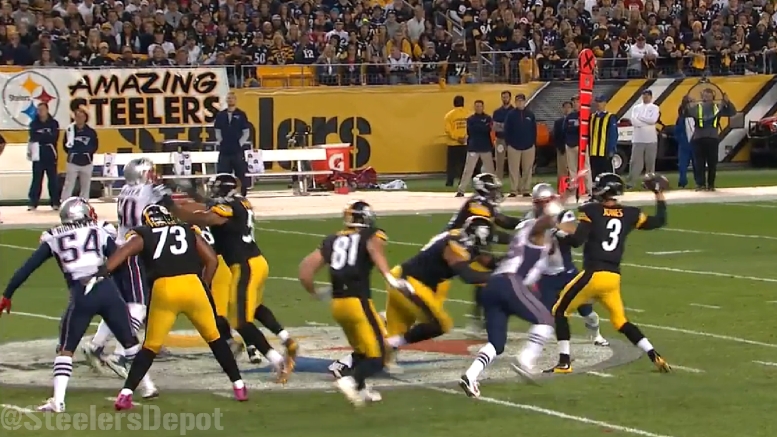 It goes without saying that whenever Landry Jones is starting a game, you know right off the bat that the Pittsburgh Steelers are at less than full strength. Jones is obviously not going to be starting if the team is healthy. I don’t think that Ben Roethlisberger would even sit out a Week 17 game with home field advantage locked up.

Be that as it may, we all know by now that Jones kind of is what he is. There is some argument as to what exactly that is, but as usual, the truth falls somewhere in between the extremes of either position, and on Sunday, he showed some of the good and the bad.

Unfortunately, he didn’t get off on the best foot, and he had two of his worst throws and/or decisions within the first five minutes of the game. The first third-down play of the game on the team’s opening drive is indicative of one of his problem areas, and thus worth illustrating.

Facing an early third and seven, Jones attempted to find his tight end on a drag route over the middle, but, as he often does throwing short passes in the middle of the field, he threw behind his man, which caused him to let up and resulted in him being tackled without even having an opportunity to accelerate for first-down yardage.

Later in the first quarter, after the defense got a quick turnover, the Steelers were back in a third-down situation. Jones decided to play aggressive and went for the end-zone shot, but his ball placement was poor, giving the defensive back an easy read to cut off the receiver. Exacerbating the execution of this play was the fact that he had a wide open man to the left for an easy first down.

Of course, he also made some excellent throws, including his touchdown pass, but his nicest toss of the day was a rainbow shot to Antonio Brown for 51 yards that was about 31 yards in the air that he dropped right in the bucket. He is capable of making these plays, and he has shown it in a number of his appearances.

He also hits the timing routes, and tends to be more accurate when throwing outside the numbers. A good example of that was a quick out to the tight end late in the first half, hitting his target in the numbers at the left sideline for 10 yards and stopping the clock on a play that took four seconds.

Late in the third quarter, Jones was able to find his man down the field on a deep dig route. He could have given the receiver a bit more room to run, but given the circumstances, on third and 10 and under pressure on a blitz, it’s certainly understandable.

Jones is a whipping boy for many, but he is a better quarterback than his biggest detractors are willing to admit. He executes the offense well and is able to make a few plays. He has his weaknesses, but the offense can operate. The unit struggled on Sunday with execution, but that wasn’t all on the quarterback.