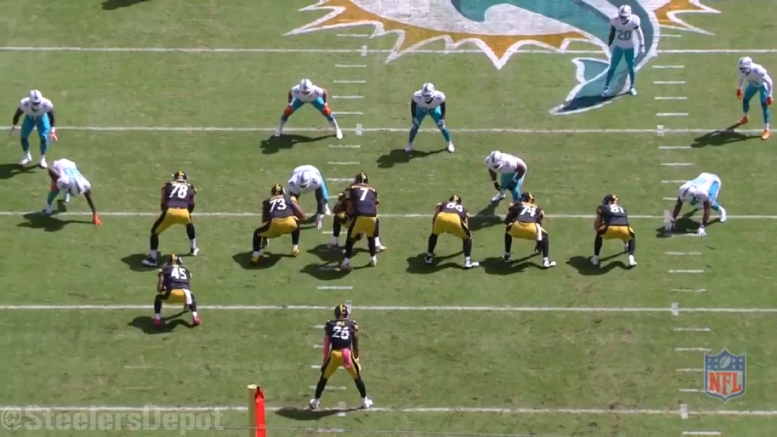 It took six games, but the Pittsburgh Steelers finally got fullback Roosevelt Nix back after the second-year player spent most of training camp and the preseason, all through the first five weeks of the regular season, dealing with a back issue that has kept him sidelined.

Although the fullback position doesn’t play a significant role in the Steelers’ offense these days, in which they tend to favor throwing the ball upwards of two thirds of the time, I do not believe that I was the only person anticipating seeing him back on the field on Sunday.

Unfortunately, it was not one of those game conducive featuring the traditional sort of fullback that he is. And whether it was entirely due to the circumstances of the game—which certainly played a role—or the team’s desire to bring him back slowly in order to monitor how is back is doing, he really hardly played at all against the Dolphins.

In fact, he only saw four snaps throughout the game, and one of those four snaps came on the final play of the first half, a kneel down to end the second quarter. His three meaningful snaps all came in the first quarter, one of this was a play-action pass.

Nix’s first action came on the third play of the game, on which he functioned as the lead fullback through the left-side B gap, on which he did a great job of driving the defensive end out of the hole. The problem is that he was being blocked, unsuccessfully, by the left tackle, which forced Nix to pick him up. This resulted in two blockers on one player, and was a factor in the play gaining only two yards.

His second snap of the game came on the second play of the Steelers’ following drive, another running play, only this time, his individual effort was much less successful. His assignment was to pick up the left outside linebacker through the hole, but the defender was able to leverage him and work to the inside. He nearly made the tackle, but Le’Veon Bell was able to escape him and work to his left to pick up three yards.

As mentioned, Nix was also on the field in a 22 personnel look in order to show run, which functioned to sell the play-action on a passing play that picked up 12 yards. But what is interesting is that the Steelers also used David Johnson as a fullback on two plays.

Neither of them were traditional carries, however, as one was a passing play on third and one and the other was the end-around to Darrius Heyward-Bey that went for a touchdown.

Nix also saw seven snaps on special teams, but as a percentage, that was still a fairly light workload. Given the injury situation the Steelers find themselves in, I would expect them to be running a lot next week, and perhaps this will be conducive to seeing a heavier workload for the fullback.