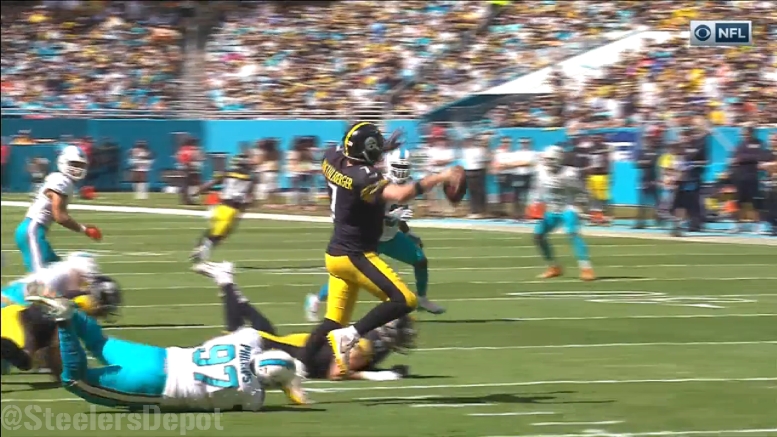 Fresh off their bye week, the Pittsburgh Steelers were back practicing again on Monday and there’s some good news to pass along related to that.

For starters, quarterback Ben Roethlisberger (knee) was reportedly a partial participant on Monday and that included him doing some scout team work, per Chris Adamski of the Pittsburgh Tribune-Review. It is still unclear, however, whether Roethlisberger will play Sunday in the Steelers road game against the Baltimore Ravens.

For what it’s worth, Roethlisberger reportedly ran some no-huddle on Monday, per Chris Mueller of The Beaver County Times. That’s great news being as Roethlisberger is now just two full weeks removed from the procedure that was performed on the meniscus in his left knee.

Per a report by Mike Prisuta of DVE Radio, cornerback Ross Cockrell said Monday that Roethlisberger also got some work in with the first-team offense during the session.

Also practicing fully on Monday were defensive end Cameron Heyward (hamstring), wide receiver Markus Wheaton (shoulder) and tackle Marcus Gilbert (ankle), per Adamski. While it’s still early, all three players appear to be on track to play Sunday against the Ravens with Heyward likely being the most questionable of the three.

As for Wheaton, he said after Monday’s practice that it would be a surprise to him if Roethlisberger played against the Ravens.

While there’s still no guarantee that tight end Ladarius Green (ankle) will make his 2016 debut Sunday against the Ravens, he reportedly participated in Monday’s practice and that included him donning pads for the first time, per Mueller. Green has yet to be activated from the Steelers Reserve/PUP list and some believe that might not happen until after the game against the Ravens.

On Tuesday, Steelers head coach Mike Tomlin is likely to provide a full injury report during his Tuesday press conference and at that time we should have a little more clarity as to which of the injured players might ultimately play against the Ravens.

Cam Heyward and Markus Wheaton confirm they each were full participants in practice. Ben did scout team work (partial participant).

Cockrell said Ben worked "scout (team) and the (1st-team) offense." Will Ben play Sunday? "I can't put that out there, but he looked good."

Wheaton said it would be a surprise if Roethlisberger played on Sunday vs. Ravens. "It would. But it would be nice."