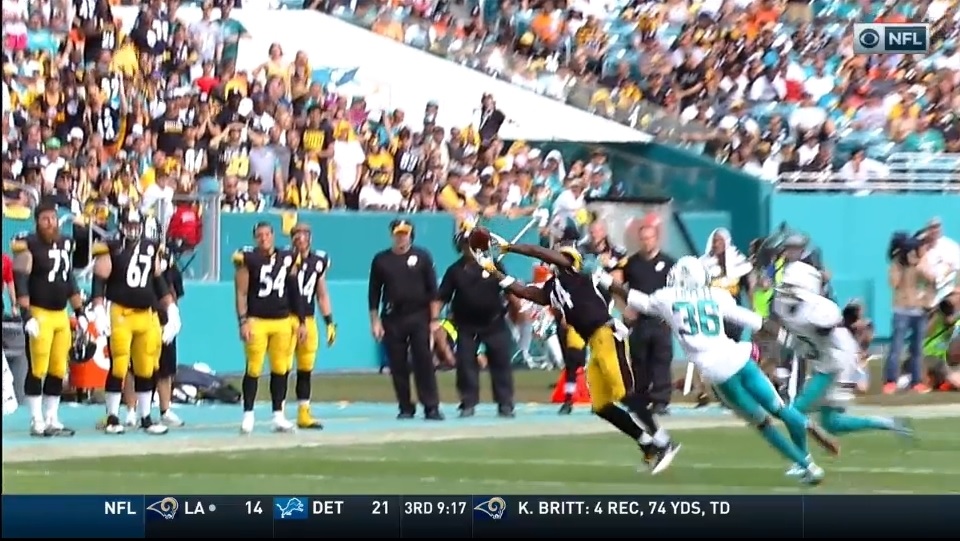 After going over some season statistics yesterday, I couldn’t help but notice something, and that is, with the exception of wide receiver Sammie Coates, it doesn’t appear that any of the Pittsburgh Steelers’ main contributors in the passing game are really getting the opportunities to make the most of their receptions.

Even perennial All-Pro Antonio Brown’s numbers are down, as he is averaging just 11.9 yards per reception at the moment. With the exception of his rookie season, during which he sparsely played and had just 16 receptions, that would be tied for the lowest mark in his career, which occurred in 2012.

The one that sticks out the most to me, however, is the tight end position, specifically starter Jesse James, who has 20 receptions through six games, but has just 141 yards to show for it, as he is averaging just 7.1 yards per reception.

Eli Rogers’ 10.4 yards per reception is nearly spectacular nor poor from the slot position, although it is on the lower end of the spectrum, but DeAngelo Williams has averaged only 6.1 yards per reception. Le’Veon Bell, at least, has impressed with his 8.9-yard average on 20 receptions, which is already tied for the second-most on the team.

In other words, what these numbers are indicative of is the fact that, for most of the players involved thus far, the offense has not been as explosive as it has been in the recent past. Brown is not getting as many yards after the catch as he is used to. It has been Coates’ vertical success that has kept the deep threat alive, as the only player on the roster with a reception of 40 yards or more.