Fresh off an offseason that saw Mohammed Sanu and Marvin Jones score big money deals, Pittsburgh Steelers wide receiver Markus Wheaton looked to do the same. The cards began to fall in Wheaton’s favor early with the suspension of Martavis Bryant, retirement of Heath Miller and injury to Ladarius Green. Unfortunately, the odds have not played out as Wheaton hoped; through five weeks of the 2016 season the wide receiver has found himself without in an identity in Pittsburgh’s high firepower offense.

Antonio Brown, Sammie Coates, Jesse James, DeAngelo Williams, Le’Veon Bell and Eli Rogers. Those are the Steelers who have received more targets than Wheaton thus far this season. With Coates grasping the deep threat role and the duo of James and Brown occupying red zone targets from quarterback Ben Roethlisberger, Wheaton has become a non-factor, turning just 9 measly targets into 4 receptions for 51 yards with 1 touchdown. 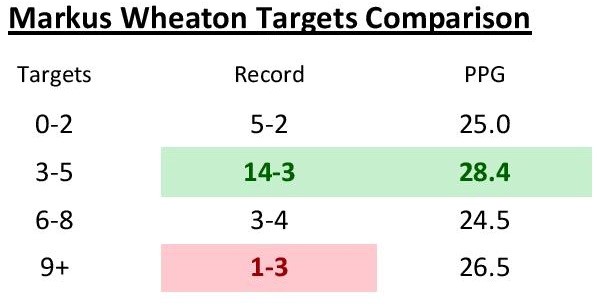 The Steelers’ offense averages their most points per game when Wheaton is targeted 3-5 times, decreasing with every added target to Wheaton’s total. Contrary to belief, this does not mean that Wheaton receiving the ball results in a Steelers loss but means that the offense is most efficient when it does not rely on Wheaton to win. Wheaton receiving many targets is often the consequence of the Steelers’ other offensive weapons being neutralized, which is never a positive note.

While the news of Wheaton’s production may disappoint both his fantasy owners and his checkbook, it plays little effect to an offense with a surplus of weapons. Moving forward through 2016, Wheaton will have to accept his ‘jack of all trades, master of none’ role in the Steelers offense. Unfortunately for him, that won’t happen this weekend as the former third-round draft pick was ruled out for the Steelers Sunday game against the Miami Dolphins because of a shoulder injury.