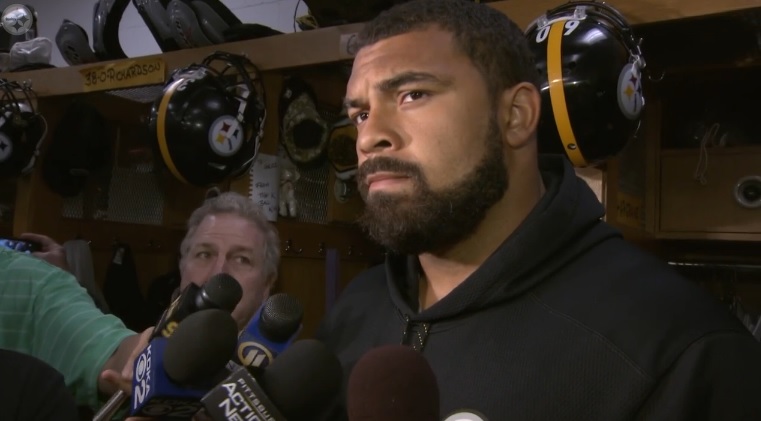 Even though Pittsburgh Steelers defensive end Cameron Heyward was unable play in Sunday’s home loss to the New England Patriots because of a hamstring injury, the team’s defensive leader still had quite a bit to say after the game was over.

Heyward, who hopes to return to the field after the team’s upcoming bye week, said after Sunday’s game that he wasn’t happy at all with his teammates defensive performance against the Patriots and especially in the second half when the score was close.

“We had momentum going in,” Heyward said, per Ed Bouchette of the Pittsburgh Post-Gazette. “It was 20-16, and we let them get that. And it was like we just quit. I don’t mean to say that lightly, but I just felt like we had so many opportunities out there.”

After Pittsburgh cut the Patriots lead to just one point with 8:49 left in the third quarter, the Steelers defense took the field following a touchback on the kickoff and then proceeded to quarterback Tom Brady and his offensive counterparts to drive 80 yards down the field in just five plays to go ahead 20-13.

That Patriots scoring drive began with running back LeGarrette Blount running for 11 and 25 yards on the first two plays and ended with tight end Rob Gronkowski catching a 36-yard touchdown pass down the middle of the field from Brady.

That scoring drive by the Patriots didn’t sit well with Heyward.

“That [play by Gronk], I know he’s a great player but that can’t be the end of it,” Heyward said. “I felt like after that, it was almost like the wind was pushed out of us.”

Blount wound up rushing for 74 yards in the second half and as a team, the Patriots ran for 140 yards on the Steelers defense in addition to scoring two easy rushing touchdowns to their left, which is the side Heyward normally lines up on.

With Heyward sidelined the last two weeks the Steelers defense has allowed 362 yards rushing and that’s certainly uncharacteristic of the unit and especially in back-to-back games.

“We just have to really buckle down and have a good defense and be technique sound,” Heyward said. “I would say in the beginning of the year besides the Philadelphia game, we were playing pretty good. You see these past two games and you’re like, ‘Whoa, 200 yards for a running back and another 120’. At least we should have responded better and not given up that.”

While Heyward has been forced to watch the last two games on the sideline, rookie defensive tackle Javon Hargrave and veteran Ricardo Mathews have both played in his absence. Even second-year defensive end L.T. Walton has seen some action as he played 11 snaps Sunday against the Patriots.

There is so much wrong with the Steelers defense right now as they enter their bye week as not only have they given up a lot of yards on the ground in the last two weeks, they’re still not getting sacks or interceptions, either. After not sacking Brady on Sunday, the Steelers defense now has the least amount of quarterback takedowns in the league through the first 7 weeks of the regular season. Heyward, by the way, is responsible for 3 of the team’s 8 total sacks.

When they return from their bye week the Steelers will play on the road against the Baltimore Ravens, who have lost their last four games after starting the regular season 3-0. The Ravens offense has only rushed for more than 100 yards in a single game twice so far this season and in their Sunday loss to the New York Jets they only registered 6 yards on the ground.

As the team’s defensive captain, Heyward has every right to blast his teammates even though he hasn’t been able to be on the field with them the last two weeks. Hopefully he can lead by example if he’s able to return to action in Week 9 against the Ravens. This defense needs top improve drastically if the team hopes to compete for a championship in the second half of the season and performances like the one we saw on Sunday simply won’t cut it.