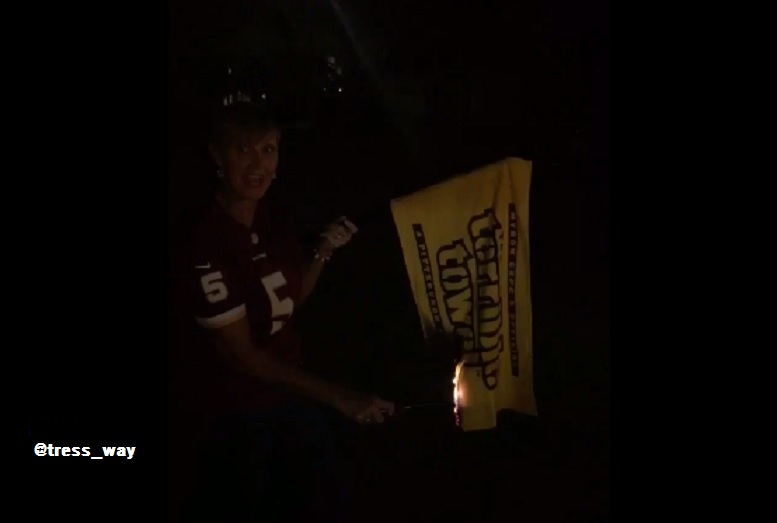 The mother of Washington Redskins punter Tress Way decided to play with fire recently both literally and figuratively.

In a video that posted Monday morning on the Twitter account of Way, his mother is seen setting fire to a Terrible Towel.

Perhaps Way’s mother should have done a little bit of research before disrespecting the Pittsburgh Steelers longtime rally accessory.

Former NFL players Earnest Byner, Derrick Mason, T.J. Houshmandzadeh, LenDale White, Keith Bulluck and Ray Rice all know firsthand what usually follows an individual disrespecting a Terrible Towel and none of them went as far as to set fire to one. Even NFL mascots around the league are not immune to the potential bad luck that can follow the desecration of a Terrible Towel.

The Terrible Towel is not only a symbol of Steelers’ fans allegiance to their team, it also has a great cause associated with it thanks to the team’s late radio and television broadcaster Myron Cope. At last update, proceeds from sales of the Terrible Towel have raised over $3 million for the Allegheny Valley School, which cares for people with mental disabilities and physical disabilities. I wonder if Way’s mother knows that.

While Way won’t be on the field very much Monday night being as he’s a punter, perhaps he better consider keeping his head on a swivel when he is out there as I suspect someone such as Steelers linebacker Vince Williams would like to inform him that his mother’s burning of Terrible Towel is frowned very heavily upon.

Perhaps Way should also search for the video of Steelers wide receiver Antonio Brown kicking Cleveland Browns punter Spencer Lanning in the face during a return a few years ago, or the one of Cincinnati Bengals punter Kevin Huber getting his jaw broke by former Steelers linebacker Terence Garvin, who just so happens to now be a member of the Redskins.

Should Way wind up having a less-than-stellar punting performance Monday night, it will be easy to trace it back to his mother’s actions.

Got the "good luck and I love you" text from mom and dad. Only this time there was something extra…. HTTR pic.twitter.com/hFPYGqti1C