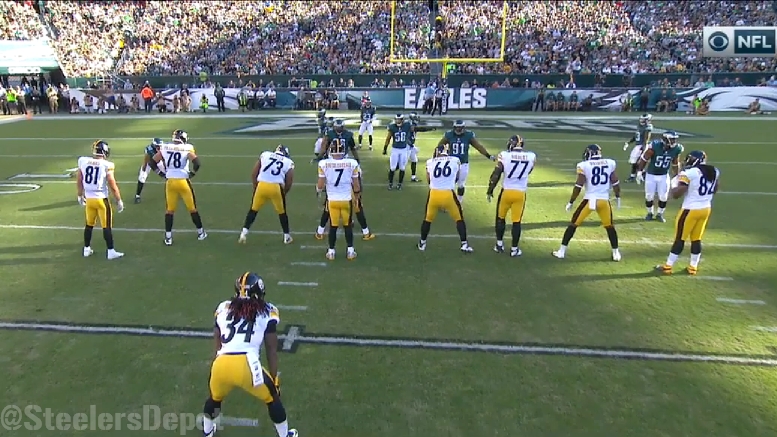 On Sunday, the Pittsburgh Steelers opened with a 12 personnel look to being their first offensive series. With Jesse James lined up offset to the right of the offensive line and first-year tight end Xavier Grimble serving as the in-line blocker on the left side, though both ran a route after the snap.

That was one of the few times over the course of the game that the Steelers actually utilized the multiple-tight-end set against the Eagles, as Grimble and David Johnson only combined for 13 total snaps during the game, of 60 total snaps, and there were even a couple of snaps over the course of the game in which James was not on the field, after he saw action on every single snap of the first two games.

The reason for this is obvious, of course. Over the course of the first two games of the season, the Steelers regularly and routinely were playing with the lead. At times, they were playing with a two-possession lead, if not three. As a result of this, they spent much of the second half in these two games focusing on running the ball and keeping the clock moving, and they were largely having success in doing so.

On Sunday, they neither had the means, desire, nor opportunity to effectively get the ground game going, as, excluding a seven-yard scramble, the Steelers ran the ball just nine times—single digits—for just 22 yards, choosing rather to throw the ball 44 times, which is understandable considering they spent most of the game trailing, and never with the lead—nor even tied after the first points were scored.

It was actually the first two plays, and six of the first seven—and eight in total on their opening drive—in which the Steelers used multiple tight ends at the same time, mixing and matching between Grimble and Johnson as the second tight end.

Consider that. More than half of the Steelers’ total instances of the 12 personnel package came on the opening drive, in the first six minutes of the game. And one of those snaps featured three tight ends. It is also interesting to note that on the final play of the drive, Grimble was actually the lone tight end on the field with three wide receivers and a running back as his company.

Of course, the Eagles went on to score a field goal on their first offensive possession. They then scored another touchdown following a five-play Steelers drive, and thus were down by 10 points within the first 13 minutes of the game, so it’s no surprise that the tight ends got little burn thereafter.

Of course, the lack of run-heavy packages did no favors in trying to establish the run, but that is not something that they ever tried, and certainly did not succeed, to do, which is obviously the case when you have a five-to-one ratio of designed passes to runs.